I think I'm fairly upbeat. By that I don't mean that I can't get down, that I don't complain or get ticked. All of those things are true about me. But it usually doesn't take long before I'm trying to see things from a spiritual point of view,  looking for the Romans 8:28 side of things, searching for God's hand in whatever situation I find myself in.  So while I'm not likely to ever be found singing, "The sun'll come out tomorrow... tomorrow.." like Little Orphan Annie, I pretty much believe that the Son will come out if not now, then soon, and show Himself in the midst of our situation, whatever it may be. 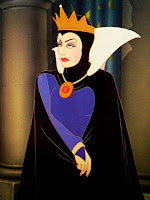 It seems right now, however, that since I've determined that I'll see each person I meet as someone Christ died for, most of the people I've met casually over the past few days maybe don't have horns on their heads... but... you could have fooled me! (And I daresay they have thought the same thing about me probably!)  So why, now that I'm determined to meet everyone with a sort of kiss of grace to shine upon their face, do the ones I encounter seem mostly like toads?  (And I've already got my prince, I'm not looking for another...)
But that's not all.  I started my list of a thousand things to be grateful for about a week ago, was going strong and then somewhere around a hundred I just... bottomed out.  Not only lost any and all sense of gratitude but it's almost like I've been studying for the last two days to become a stand-in, not just for Grumpy, but for the plum roll of the Wicked Queen  from Snow White.
Why is that?
Why do we determine to do something that we know is good and then it seems like everything conspires against it, including our own desires?  I read today that as believers, we are living, standing, loving, breathing - in the middle of a battlefield. A titanic conflict between good and evil.  A war that we can't see but is none the less real.  And if, when things are good, we forget that, we will sooner or later be blindsided.
And that, I think, is pretty much where I've been the past couple of days...blindsided. Expecting that since I have these two goals, it will be, um, easy to keep them???

Hmmmm...
Now I think it's time to get real.
Not give up on showing the love of Christ to others or on my desire to keep track of the things for which I'm thankful.
But at the same time, realizing  there is something in the universe that doesn't like a grace approach to everyday encounters and ditto for thankful hearts.  At 57, I'm still learnin', obviously:    it's not enough to set a goal; you've got to suit up for the game as well. :)