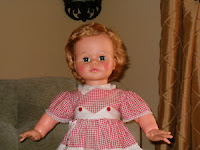 Like tons of other people at Christmas, we try to help someone out, give a little extra, etc. in order to honor God and really enter into the spirit of the season.  Last year we did the Christmas shoe box thing which is always fun.  But somehow, even though we got the bar code for our shoe boxes, we never were able to learn where they went. So this year we decided to send our own shoe box gifts to three kids overseas that we help sponsor: two girls and a boy.
Getting the stuff for the boxes was fun and not a problem.  We bought cheap things like underwear, socks, tooth brushes, tooth paste, crayons, and a  small coloring book for each.  In each box we put a toy as well. For the girls, it was a 10.00 Barbie. For the boy it was a 5.00 collection of Hot Wheels.
I, of course, procrastinated on finding boxes and actually getting address labels and packaging the stuff.  So although we had the stuff to go in the boxes for a quite a while, I didn't actually get the boxes to the post office until early this week - and then I just barely made it before the post office closed.
The postal clerk asked me if I wanted to mail the first package first class. I asked him how much that would be and it wasn't much.  So I told him to go ahead.  He did... Not only for that box, but for all three - one of which was going to Ghana!  So  when I looked up from filling out the overseas forms and saw the grand total, it sort of took my breath away.  Without thinking, I blurted out -the postage is more than what I paid for the stuff inside on that last box! He said he understood and then I asked when the packages would arrive. He assured me they would arrive within 7 to 9 days if I sent them first class.  We had worried that my procrastination might mean the kids would not get the gifts before Christmas, especially the little girl in Ghana. So I went ahead and bit the bullet and sent all three packages first class, understanding that it was my fault the postage cost so much.
However, on the way home, I started kicking myself mentally, thinking, "Why did you do such a stupid thing?  Surely there was a better way to invest our money for the Lord. What is the deal here anyway? All that trouble and time and energy just to get some socks and a Barbie or some hot wheels to some children that we don't even know?"  I really thought that it would have been better if we had just sent some money to a mission organization or the American Bible Association or something.
When Phil came home, he asked me if I had been able to mail the packages. He was really pleased that I had... and I was really pleased that he didn't ask me how much it cost to send them :(  I guess it was our own version of "don't ask, don't tell....":)
I was also pleased that I could mark the packages off my list of things to do. 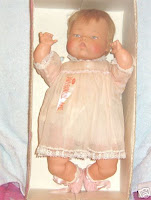 Today I was surfing the net, wasting time actually, when I accidentally came across a picture of an old toy, one that I used to have.  That was all it took.  Immediately I was on the hunt for pictures of other toys that I used to have and that I hadn't thought of in years, many of which I got for Christmases in the late 50's and early 60's.  As I found some of my favorite dolls (and mourned the fact that I couldn't find pictures of all of them), intense memories came back to me.  I could almost feel the material of their dresses and I could remember holding the baby dolls,  talking to them and singing to them (and also leaving them out in the rain.  Don't try that with a talking doll from the sixties.  Chatty Kathy's few recorded phrases sounded like she'd been on a three-day binge after she got rained on....)
Not only that, but along with the memories of the dolls themselves came memories of my hopes and dreams way back then as well as favorite places where I used to take my dolls and set up house (the well house at my grandparent's farm for the baby dolls -who, I am afraid,  lived on a steady diet of mud pies:(  The attic for my and my sister's Barbie dolls. )  And I could even remember which outfits my sister had for her Barbies and which I had for mine.. and how we often argued over who had better taste in clothes.  (She did, by the way! I realize that now, hands down!)  I also remember how my father struggled to fit together a cardboard, fold-up Barbie doll Dream House for me without tearing the thing up.  (He needn't have worried -  by the time I was through with it, the walls and the cardboard furniture were held together with clear tape and glue anyway. But til the very end, I thought it was the most perfect house in the world and often told my mom I wanted one just like it when I grew up... (And guess what!! Just kidding...)

At any rate, I'm sure anyone who reads this is way ahead of me.  After literally reliving parts of my childhood - some of the best parts - simply by looking at dolls that I used to drag around by their fake hair or dress up in designer clothes - it suddenly dawned on me that's it's not a waste of money to send "just a toy" to a child in a third world country. Because you aren't sending just a Barbie or a Hot Wheels car, you are sending memories-in-the-making, helping to shape their dreams and aspirations, showing the love and generosity of Christ who once said, "Suffer the little children to come unto me." What better thing could you do to honor His birthday?
Posted by Unknown at 12:28 PM