Normally, I'm pretty conservative and somewhat shy in certain circumstances.  But for some reason, a few years ago I impulsively bought a Christmas necklace that lit up.  I never was sure if it was a sign of my impending second childhood or what but, even though it was out of character for me, I not only bought the necklace, I wore it!  To school no less! And I was the teacher...
And then a friend gave me some socks that had Christmas lights on them which I thought was going beyond the pale... I was sure that I would never wear them but on the last day at school before Christmas break officially started, I decided to throw caution to the wind and wear both the socks and the necklace.
As it turned out, we had a short faculty meeting that day and the principal had the unfortunate task of having to tell us that we would need to jump through yet another hoop for the State Dept. of Education, which involved (of course) more paperwork. And that the deadline for this extra work would be right after we returned from Christmas.  This was not what any of us wanted to hear and in looking back, I'm sure it wasn't what he wanted to tell us either.
Many of us were worn out, just hanging on for the two week break.  A higher percentage of kids than normal that term seemed determined to make Santa's Bad List and we had already been doing extra work to get ready for a huge inspection that was looming dead ahead in January or so. So we were all sorta sitting around with our tongues hanging out of our mouths anyway when we got this extra assignment.
After the meeting was over, the mood was not good around the school. The kids had already gone home and the teachers were basically just scrambling to finish grading and get grades in before we could leave at 3:30.  So there was some grumbling as we made our way back to our rooms.  Some were saying they would have to work over Christmas break to meet this new deadline. Others were saying they would just have to do the extra paperwork when they returned, they already had travel plans for Christmas.  Some had a few colorful metaphors and similes to clarify just how unpopular this new assignment was :)
One of the other teachers , however,  seemed totally unperturbed by the bad news.  When we asked her what her secret was,  why she had such a calm demeanor and wasn't upset, she said that it was simple -  when the principal started talking and she realized it wasn't going to be something good, she just focused on my socks as they blinked off and on  for the rest of the meeting and thought about Christmas...:)
Later, I had to pick up a friend of our son's - he was supposed to be at work and at the last minute, he didn't have a ride. As as I was crossing the overpass to get to Cameron's house, I could see red lights flashing but when I looked in the rear view mirror, I couldn't see an emergency vehicle anywhere.  Several times I looked around nervously, checking  for a police car and wondering if I  was about to be pulled over before it dawned on me:  as dusk had fallen, the red twinkly lights on my necklace were somehow being reflected on my windshield.  It was one of those moments when I was glad that there was no one else in the car with me!  But, as usual, even though no one witnessed my furtive efforts to avoid the non-existent  police, I told on myself as soon as I got home:) 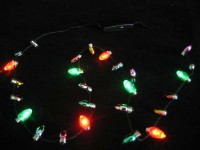 To this day, I'm not really sure that my family wanted to appear in public with me back in the days when I was decked out in  the twinkly necklace and  socks - although I have to say in my defense that for once, my ensemble did match!!  And I'm pretty sure they were relieved when the socks came a cropper in the washing machine (their sympathetic commiserations didn't sound sincere...) and also when the batteries finally died in the necklace (and couldn't be replaced...)  But from something that silly, we've gotten a lot of laughter.
And that's another thing I treasure about Christmas - the ability to laugh and to make memories that will bring smiles to our faces down through the years.
Posted by Unknown at 9:25 PM