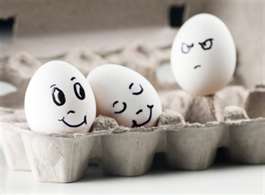 This morning as I was trying to have a quiet time, our rat terriers were not so cooperative.  And I had bribed them already!!!  Each dog had already  had his/her moment in the sun: they'd been outside for a short time so that they could take care of business, bark at the neighbors (maybe not such a good idea since one is bi-polar and likes to smoke weed.. but... I digress...), and chase an elusive something-or-other that apparently lives in the bushes next to our porch.  I say elusive because they sniff around the hydrangea bush every day and every evening and have for the last two years or so... without ever catching anything.
Then I let them back in the house where each has his/her own pillow beside my chair and each dog has a leather chewie.  So now that they are settled, I can have a little peace and quiet, right?
Ummm.  No.
Lilly doesn't really like chewies.  Buddie is addicted to them. So she tries to keep her treat solely in order to prevent Buddie from having it. Which means that she spends minute after eternal minute, digging at her pillow  in an infuriating fashion, trying to "bury" her treat  in plain sight.  (She could be a poster-dog for the word "futility".)  After Buddie finishes most of his treat, he sidles over next to her pillow, where she hunkers down and begins to growl at him.   All this for a treat she doesn't even really want.
Eventually, she decides that there is something she wants and so she abandons her post to stand in front of me and whine.  I try to ignore her but she continues.  So, eventually she wins.
I get up and let her out only to see her sniff around the Hydrangea bushes and the Ivy  for the billionth time  and even though I know she speaks no English, I advise her to give it up. (I'm sure there is a lesson here somewhere... ha!)   I mean, two years of sniffing around the same foliage??? Come on!  Give it a break already!!
When I let her back in, lo and behold, Buddie has snitched Lilly's chewie and is back on his pillow tearing it to pieces, his own half-eaten beside him.  What a pig!  (I mean, dog...)   So I take his left-over chewie and put it on Lilly's pillow where... she proceeds to try to - you guessed it - bury it!
Meanwhile, the lizard or whatever (pretty sure it's not an anaconda - think we would have seen that by now) is still meandering around the bushes and it's only a matter of time before Lilly remembers her nemesis still lives and abandons her post to go after it, leaving yet another prized possession vulnerable to the high thievery that goes on around here.
As I was sitting here feeling superior to my dogs, which is not too hard to do, by the way, I tried to persevere with my prayer time.  There are names on the list that are easy to pray for; others not so easy.  (Lord.. (whine, whine)... they stole my chewie.. Ooops, where did that come from???   I mean, they stole something that was rightfully mine...)
Or as Ann Voskamp puts it in her book, One Thousand Gifts, "Though I can hardly whisper it, I live as though He stole what I consider rightfully mine: happiest children, marriage of unending bliss, long, content, death-defying days.  I look in the mirror, and if I'm fearlessly blunt - what I have, who I am, where I am, how I am, what I've got - this simply isn't enough.  That forked tongue darts and daily I live the doubt, look at my reflection, and ask:  does God really love me?"  p. 14
Wait a minute!  She's not talking about someone on her prayer list who has what she feels is rightfully hers; she's talking about God as the someone who has withheld what is rightfully hers. God described as someone who... owes her. In her heart, that is what she believes.
Wish I could say I've never been there  but.. I can't.  I frequently,  earnestly  petition God to give me what I feel deep inside is mine by right.   Happy, healthy, productive kids; the perfect marriage; long life with no joints that ache or vision that blurs. And if I feel He isn't giving it to me or won't promise to keep on giving it to  me, I can get angry, upset, depressed.
Today I started a second list for 2012 (in addition to my 1,000 Things to Be Thankful For).  This list is just snippets of things that I learn about God - who He is - as I read through the Bible.  Among the things I wrote down today are:
Who is God?


Sooo... on second thought, maybe I should quit beating around the same ol bushes, quit thinking in terms of what He (and others) owe me, and get on with living in the light of His glory.
Hoping I'm someone who can learn.. even from a couple of Rat Terriers...  But... just in case I can't, keep your paws off my Cheetos, my Kindle, and whatever you do, don't come callin' on Sunday afternoon 'cause that's my nap time...Ha! 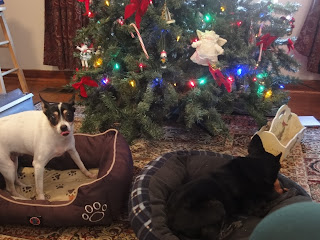 *(Am-ha'aretz, according to The Complete Jewish Bible means people of the land. But in the time of Christ, it carried a bad connotation, basically meaning boors back then).
Posted by Unknown at 12:17 PM