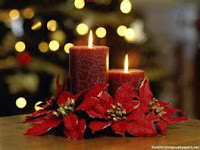 The rest of the service went well and I think we all enjoyed it. To me, there is something so right about sitting in a worship service, surrounded by beauty,  as the final minutes of Christmas Eve melt into Christmas morning.  If you've never done it, it really is wonderful.
But I still think about the hiccough fiasco periodically.  We could have handled it, normally.   For some reason things just weren't working right and none of our bag 'o tricks worked that evening.
On the other hand, there are some things that no matter how hard we try, we cannot handle by ourselves - ever.  And that, really, is what Christmas is all about. God is holy, pure, and without sin. We aren't. Just as light cannot coexist with darkness, pure holiness cannot coexist with even a speck of sin. Yet God through His Son,  made a way to bridge the gap between light and dark, between sin and holiness, between Himself and us.
If you don't understand why  God had to send His Son to earth, please consider prayerfully looking at these verses in the Bible:

Romans 3:23, Romans 6:23, Romans 5:1, Romans 8:1, Romans 10:9-10.  Another good passage is Isaiah 53.  Or even just listen to the words of Handel's Messiah, which are taken from the Bible.
The message of Christmas is soooo much greater than a baby in a manger, candles, music and flowers at midnight, and a few answered prayers here and there.  There's an unbelievable love out there for each of us and that is what Christmas is all about.
Posted by Unknown at 12:47 PM