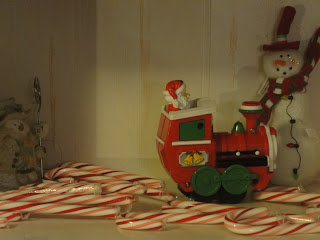 I have read that  Elizabeth I of England once told the King of Spain that she was a weak woman and therefore entitled to change her mind (or words to that effect).  I'm thinking that if it worked for her, it might work for me... :)  I do want to share another memory along the lines of what I shared in yesterday's blog, but as we were putting out Christmas stuff yesterday (finally!!!), another memory came to mind and  at my age, when they come along you have to write them down before they leave again... So I'm going to shelve yesterday's memory track until another day.
When David was about 5 years old, we used to watch a battery-operated Christmas train go around this extremely short, plastic track - it was on sale at a nearby store. We both wanted it but it was too expensive for our Christmas budget back then - we had presents to buy, turkeys to purchase, yada, yada....  But then one day we saw a 50% sale sign near the train and it was a couple of weeks still before Christmas.  I asked a store employee if the train was included and he said he didn't think it was.  However, he got the manager, who looked at David and looked at the train and then said, "Well, technically it's not included in the sale items but ... I'm going to go ahead and give you the discount."  We were thrilled!
We came home and Phil set it up under the tree where David watched it's short journey to no-where and back  again, over and over. It was a huge success!  A few nights later, David was in his room when Phil and I heard this tremendous screeching and yelling - a horrible commotion. Then David came running out of his room, grabbed his Play-Skool plastic chair, shoved it in the corner and sat down facing the wall, looking scared as all get-out.
I ran into his bedroom where this awful commotion was still going on, only to see the cat frantically racing  around the room with the battery operated Christmas train stuck to the fur on its back, still merrily playing its tinny carols.  The cat was not a happy camper...  I couldn't even get near the  cat so I started yelling for Phil. He ran into the room, shut the door to keep the cat in there and finally managed to hold the animal still long enough to untangle the train from its fur.
Phil didn't go unscathed in this rescue operation and as soon as the cat was freed from the train, he demanded to know how in the heck the train got on the cat's back in the first place.  David was still scared to death but he was also puzzled.  How could anyone not figure that one out?  To him, it was so obvious - you have a battery-operated train that plays Christmas music and a cat that normally lets you drag it around the house tail over head - how could anyone resist the opportunity to run  the choo-choo over the cat's back??? And who would have ever thought that it would get stuck in the (long-haired ..) cat's fur???
Again, as I stated in an earlier blog the phrase "seeing Christmas through the eyes of a child" has more than one meaning.... ;)  If you have kids, grand kids, nieces, nephews, neighbor's kids, whatever -  and they are driving you crazy and/or doing things that seem to test your patience as well as age you rapidly - hang in there - someday you'll pull out a Christmas decoration and the you did what???!!!  holiday  moments of today will be great memories.
Posted by Unknown at 6:54 PM