I know this will come as a shock to everyone but... I was not a good child when I was little, truly!  My mother was very ill one year - I was about 4 at the time. And so I and my siblings lived with my grandparents for about a year.  I was the baby and the only one not going to school, so I basically got away with murder! And loved every minute of it.
I sometimes say that going back and forth between my grandparents' house and my parents' house was like going back and forth between Bermuda and the triangle, with my grandparents' house being the island resort and my parents' house being the other...
Thankfully, I was shy.  So I stayed out of trouble in school but at home it was quite the opposite!  I can remember throwing temper tantrums on the floor.. numerous times.  And I can remember hiding in the bushes on summer evenings while my sister called (in vain) for me to come in and do my share of the dishes.  I also recall appropriating my siblings' toys with no guilt whatsoever; my moral code at that time was simple:  their toys lasted longer than mine and so I needed them.  What I needed, I took.  I hadn't read Machiavelli back then but, clearly,  I had already grasped the main principles...
Today I was thinking about Christmas memories and, not too surprisingly, the first thing that came to mind was me getting in trouble! For figuring out what my main present was, I guess I should add.   I must have been pretty young at the time but somehow I realized that if I kept pressing the tissue wrapping paper against the box and smoothing  it out as best I could, I would finally be able to decipher what the letters on the box were. I remember working diligently at this for several days, always being careful to do this when no one else was in the living room to see me.  Finally, I had figured out all the letters!!!   IF I had stopped there, I might have been alright.  But since I couldn't really read, I memorized the letters and then repeated them to my mom, demanding elucidation.
Well, I got it!
(By the way, as best I can recall, the word turned out to be Mattel, which didn't help me any at all....)
Now, you'll be glad to know,  I behave better at Christmas and no longer cheat to find out what my gifts are ahead of time...  But even though I was a regular on the Bad Little Girls and Boys  list back then as opposed to the Good Boys and Girls list, I think I had one thing right. And that is that some gifts are meant to be wildly anticipated  - as in, dancing on your toes with breathless anticipation and doing whatever it takes to find out what is hidden inside just for you!!!
And oddly enough, that's my wish for this Christmas... That I and all my loved ones, friends, etc will be dancing with breathless anticipation and joy as we focus once again on the fact that the God of the Heavens wrapped His only and greatly loved Son in skin and bones and sent Him millions of light years (?.. not sure how far Heaven is from earth but I figure it's along trip...) down to earth to become the One who would free us from the fear of death and give us light.
Awesome! 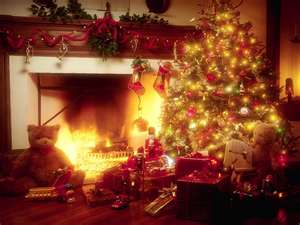