As I've already indicated in an earlier blog, our family went through some dark times. At the height of those times, there is a special memory that stands out and it was.. (you guessed it!).. at Christmas. Christmas Eve, to be exact.
The memory I have, culminated in Christmas Eve but actually started seven months earlier in the summertime of my 11th year.  We lived in the country at that time and our nearest neighbor, an older woman named Nora Deckard, lived about 3/4ths of a mile from us.  Her tiny house was small with roof shingles for the outside walls but her yard was a floral paradise - this in spite of the fact that she had, as she put it,  a crippled arm.  Apparently when Mrs. Deckard was a young woman, her parents had a car accident and her arm was broken as a result. Her family  didn't believe in doctors so the arm was never set properly and she just lived with the results for the rest of her life. It didn't seem to bother her or slow her down any.
One summer, when all heck frequently broke loose in our house,  my mom encouraged me to go down to Mrs. Nora's house on a regular basis and draw pictures of the different types of plants that she had. (I was convinced at that time that I would be a great artist someday. Didn't happen...)   Armed with a spiral bound note book containing lined paper as well as with  a box of colored pencils, I asked Mrs.  Nora if I could hang out there and sketch her flowers while she taught me about them.  (Only I don't think we used the expression "hang out" back then).
It was a match made in Heaven.
Several days a week, I went down to her house and sketched one of her flowering plants and then colored it while she talked to me about what the plant needed in order to thrive.  When I had each masterpiece finished :), she told me how to spell the name of the plant and I dutifully wrote the name down underneath the picture. The only problem was that after a few weeks, we ran out of plants.
We didn't want to run out of plants!!! 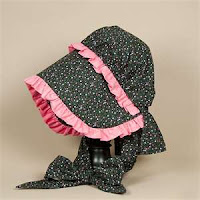 We looked for some other excuse to hang out together and hit on the perfect thing. She would teach me how to sew.  (Can't sew either...but none of this is Mrs. Nora's fault!)    The main thing she taught me was how to make an old-fashioned sun bonnet - she always wore one and had another one, freshly laundered, hanging on a nail by her back door.  I envied them and so,  with her considerable help, I made one for myself!
Eventually school started and our visits became shorter and less frequent.  But we still hung out together when we could as autumn turned into pure-dee wintertime.  One "snow day" when we didn't have to go to school (joy!), I slogged  to her house and when she let me in, I was surprised to see that the covers on her bed were turned back. (Her bed was this huge  thing that would be an antique now and it dominated her living room since she didn't have a separate bedroom).  I knew that Mrs. Nora was always tidy and her house was always neat as a pin, her bed always made. She was bundled up and the room was frigid so I asked her what was going on. She told me that on really cold days she couldn't afford enough butane to heat up the house so  she bundled up and stayed in bed all day.
This was  shocking to me and I immediately told her that  I was really sorry to hear that. As an active kid, I couldn't think of a worse fate.  She, however,  told me cheerfully that days like that didn't come often and were actually enjoyable for her because they gave her  more time to read her Bible.  The words sounded lame to me but as we talked, I became convinced she meant what she said and was just as happy bundled up in bed on a cold, snowy day as she was out working in the sun with her beloved flowers on a warm, sunny day.  In retrospect, I think she, like Paul, had learned the secret of being content regardless of her circumstances. (Phil 4:11)
When I told my mom about this oddity in Mrs. Nora's life, mom suggested that we have Miss Nora over for Christmas Eve. At first the older lady didn't want to come, thinking that maybe I had cooked this scheme up myself and she would wind up intruding on our celebrations. But just as she had convinced me that she enjoyed being housebound on horribly cold days, I convinced her that we really, really wanted her to come to our house on Dec. 24th - which we really did.
Again, this was during the years when my parents often either weren't speaking to each other or were arguing, back during the dark days when my dad became physically abusive and my mom attempted suicide. But somehow, things came together for us that Christmas,which I guess was a miracle in and of itself.  At any rate, we all sat in our tiny living room, drank hot chocolate around the tree and sang carols while my mom played the piano and my dad played the accordian.  We gave Mrs. Nora a gift and she cried because someone had remembered her at Christmas.
I absolutely loved that night and I still do.  It was truly an oasis of Christmas joy in the bleak midwinter of our lives.

Recently I googled the name, Nora Deckard and found, to my surprise,  a picture of her tombstone. I figured she had been long gone because she seemed ancient to me when I knew her back in the mid-sixties but I had no idea google would turn up anything on her, her life seemed so obscure.
And in point of fact, her life was obscure - so quietly hidden away that her tombstone had no death date on it.  The caption underneath the picture  said that  she died June 15, 1991 but then added that the date was unverified.
At first, this  really upset me. But then I realized that she wouldn't mind.
For one thing, she never seemed to mind any difficulties that came her way.
For another,  I mean, surely when you are drinking hot chocolate in Heaven and singing carols, you don't have time to get upset over an incomplete tombstone.
Now, 40 odd years later, I still remember Mrs. Nora and the joy she brought into my life.
Looking forward to seeing her again someday.
Posted by Unknown at 1:03 PM