Continuing with lessons ornaments have taught me:)

Lesson # 2.  Patience...  One year I bought a craft kit for about $2.00.  I was in my twenties at the time, working full time but unmarried.  The  kit had plastic suncatchers in the form of Peanuts characters and I decided that since I didn't have a lot of money, these would make perfect (token) Christmas gifts to my friends and acquaintances. It was a paint-by-number craft so all I had to do was follow the directions and - voila! Cheap gifts enhanced by love.   It didn't turn out to be as simple as that and it took me two or three tries before I figured out how to get the paint to stick where I wanted it and how long to let them dry before picking them up...:(   Then, as I worked on them, somehow my list of people who might like one kept growing; well,  I didn't want to leave anyone out!  Sooo.. I kept going back and  buying more  kits, bringing them home  and then sitting cross-legged on the floor in front of the t.v., watching Christmas shows while I  painstakingly painting those suncatchers.  Finally,  I had  a whopping 40 of them!  (I think my mom was worried that maybe I had become addicted to the paint or something... )  When I first started out, doing one set seemed daunting to me.  But over time, like the snail (and with the help of Christmas movie re-runs) I made it through a lot more of those than I could ever have dreamed. And I really enjoyed doing it. 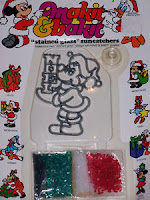 At another Christmas around the same time, I had a wonderful answer to prayer - although it may not have been so wonderful to others... My brother was home on a short furlough for a week or so but I had to work. They were predicting bad weather so I'm afraid I prayed that the roads would be bad enough that the schools would close.  And sure enough, we had an ice storm which caused  Christmas break to start about 3 days earlier than it was supposed to - I got to spend more time with Glen than I expected!  However, there's not much to do when you are iced in. (And this was the year when we could step out onto the yard and see nothing but solid white and occasionally hear a loud cracking noise that seemed to issue from some subterranean icy depth.)   Mom had gotten us some craft kits that she thought were paint by number but they weren't. Instead, they were made up of hundreds and hundreds of little bits of colored crystals that you had to put into metal frames and then melt at low temperature in the oven.  Those little bits of color were about the size of tiny candy sprinkles that go on cakes.  However, if we put even one little piece in the wrong tray, once it was in the oven, that little speck would grow until it was unmistakably noticeable.
We were doing Disney characters so you could hear us, as we  pulled out the first few pieces,lamenting  the fact that Goofy's face looked like garbage because, unknown to us, one little speck of green had gotten mixed up with the beige colors. WE finally resorted to using tweezers to pick up the colored bits and often ended up in good-natured arguing as one or the other insisted that a speck of color had gone astray as we were dropping them in.  We didn't do the things we had planned on doing that holiday but we actually had a great time and when the ice finally melted, we had made some neat memories.  Memories that involved, like the Peanuts sun-catchers, a lot of time and patience.