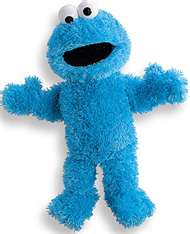 I'll be writing this on the fly, as we say in the old South, since I have a lot to do today.  Christmas brings such hectic to-do lists but it's not (always:) a bad thing!  The general anticipation of what is coming, the feeling that even as the pace becomes more frantic, we are headed towards something wonderful - a "down" day when normal things suddenly  come to a halt and our priorities are  focused on warmth, fellowship, and fun instead of on work, to-do lists, and ... more work!
Another Christmas memory came back to me last night and it centered around ... Cookie Monster...   When David was young, we had a furry blue hand puppet that seemed to be his personal confidante.   When David was upset or feeling bad, Phil could put Cookie Monster onto his hand, raise his voice a notch or two, and then magically, Cookie would start talking to David.  Somehow, it always made him feel better. (David.. not Cookie...Ha!)
We could assure David that he was going to be fine or we could try to make him laugh but.. Cookie Monster could really achieve those objectives!  And if something was bothering David, we could ask him questions but he usually preferred to confide in his furry blue friend:)
It's amazing how children respond to puppets!  Over the years, our family worked in puppet ministry - especially Phil and David (when he was older...) and whenever the puppet booth was set up at church, little kids would come up to the booth and try to reach up and touch  the puppets bending over it, looking down at them.  (Sometimes Phil would have to  be semi-stern in his high squeaky voice and say, "Boys and girls!  Don't touch!  Owwww... don't pull on my ears or my nose!  That hurts! ;)  They were simply enchanted by these furry animals come alive!
Because my brother saw that Phil was good with puppets and because he is generous, Glen spent weeks one Christmas season tracking down various puppets of all kinds - he was truly on a mission! He garnered quite a collection -  small ones that fit on the back of the hand like bumble bees and lady bugs (my favorites), then the type of hand puppets that we grew up with - simple ones that covered the hand and the wrist, and then much larger ones, like the ones the church used.  That Christmas, we had a puppet bonanza that none of us have forgotten!  It was just so neat to keep pulling puppets out of their wrappings only to find more were hiding.   For a while, David was the envy of all the kids on the block:)  And we used them!  At church, wherever..
I even took some of those puppets to school where my "big kids" (teens) would write out skits and then climb under a table and hold the puppets up over the table so that the skits were "read" by great leaders such as  Frederick the Great (who looked suspiciously like a horse) or Queen Elizabeth I  (who looked an awful lot like... a pig..)  Nothing personal intended - we just didn't have  a lot of   people puppets, we mostly just  had animals.
When I think about Christmas, I am acutely aware that God sent us the best gift that He could possibly have chosen: His Son.  As I've already indicated, He wrapped His Son up in human form (with God, nothing is impossible - how Christ became flesh is a divine mystery, not a biological one) and sent Him to live for us and die for us, to pay for our sins.
But the gift doesn't really stop there.  Colossians 1:27 says that God's plan is ... Christ in us, the hope of glory.  That's it.  That's His plan.  Christ living through us, using our hands, feet, voices, hearts, minds to reach out to others.
Going back to the puppet ministry days -of which we were not that good but we had a lot of fun with it - we noticed that the kids loved it when Cookie Monster would interrupt Phil or myself, catch us "off guard" and contradict us!  That  would always send the little ones into peals of laughter.
But what if those limp, cloth-bodied creatures could suddenly think and speak on their own and they actually did start to contradict us.. and really mean it?  Hang with me here -I know this is evolving into a weird blog....! But what if they wanted Phil and I to empower them, since they were weak, yet at the same time, they wanted to call the shots?
Christ in us, the hope of glory... Col. 1:27b
I can do all things through Christ who strengthens me..  Phil 4:13
Christ has become to me wisdom, righteousness, sanctification, and redemption  I Cor. 1:30
In Him, I have been made complete  Col. 2:10
Today I'm going to go forward by faith, knowing that Christ lives in me, believing that as I count on His wisdom, His goodness and am open to His agenda, I am indeed complete and can do all things through Him.
What a gift! 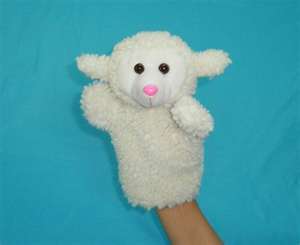