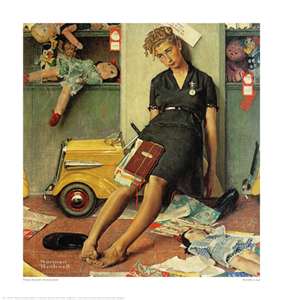 I'm finally done with all the shopping for this year - just have to make one trip (hopefully!) to the grocery store and then I can hibernate indoors while the mad scramble to get last minute presents continues right up until Dec. 24th at 11 PM or so as most stores extend their hours to accommodate procrastinators.. like, ummm, me...
Every year I tell myself I'm finished at least three days before Christmas only to find out that... I'm not. So we'll see how it goes this year.
I don't know how it is with anyone else but sometimes I get all knotted up at this time of the year, wondering if I got the right thing for So-and-So and did I spend as much on this person as I did on that person, etc. And then there's the nagging little question in the back of my mind:  did I forget anyone? (Usually the answer is "yes"; hence the last minute trek on Christmas Eve).   And then there's the wrapping to do.. Really don't envy Santa and the Elves at the N. Pole..
Somehow, I don't think Christmas is meant to be this way.  As I think back over Christmases past, these are some cameo "shots" that filter through my mind:
As children, my friends and I deciding we would re-enact the Nativity story for our parents.  Didn't happen because we got in a fight over who would get to play the part of Mary...
As a teen-ager, I remember that  a relative of my mom's passed away on Christmas Day. He was elderly and had been  a bit of a prima dona all his life, someone who had been successful in some ways  but unfaithful to his wife (who was pretty much a saint), that type of thing.   I remember listening to the adults discuss the man's passing (out of earshot of his wife and kids) and I heard one person say, "That's just like so-and-so to turn up his toes on Christmas day!  He allus did have to be the center of attention..." I was shocked but when I passed that along to my mom, she just looked thoughtful and said, "Well, there's  definitely some truth in that..."  :) 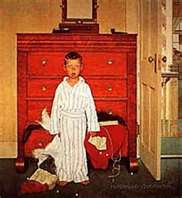 As a young adult,  I remember my mom and I  spending Christmas Eve with my sister, her husband and their young son.  It was lightly snowing and my brother-in-law had gone outside to get a bicycle kit to put together.  My sister, my Mom and I were having a good time chatting when we heard a knock on the back door. My sister opened it only to hear her husband hiss, "Hurry up and get the kid into bed!  It's freezing out here and I can't bring this box in while he's awake! I've been standing out here forever!"  All three of us went  into high gear, running into Danny's room yelling, "We just saw Santa!  Hurry up and get in bed!"  Danny hopped into bed at the speed of lightening and when I went back in his room a little bit later, he looked so serious, as only a sweet little kid can. In fact, his big eyes filled up with tears   as he pleaded, "Can you wait up for Santa and tell him I'm asleep... He'll believe you!!"  I assured him that I could.
Still as a young adult, I remember seeing my four-year-old niece, Susan,  perform in a Christmas play. She was an angel, dressed in satin, and she certainly looked the part!  What a beautiful little face!  But in the middle of the play, she suddenly turned to the boy next to her, shook her finger right in his face and we could see that little mouth moving as she apparently told him how the cow ate the cabbage.  In response, he just plopped right down on the floor and stayed as still as a mouse throughout the rest of the program.  Apparently he had been bothering her and she'd had enough!
Still in my twenties, I remember when my niece, Laura, was born in Nov. - almost a Christmas baby. At one point, the doctor couldn't detect signs of life when Laura was in the womb and so for a few weeks, we were afraid she wasn't going to make it.  But she did. She was born into a time of great turmoil. Her mother was mentally ill and her father was trying to hold the family together as best he could. What I remember about that first Christmas is that Laura was probably the best baby I've ever seen. She continued to be sweet-natured and calm through out her first year and I felt like God gifted her that way because my poor brother-in-law couldn't have handled it had she been sick or colicky. 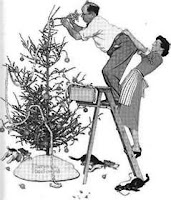 When I was 32, Phil and I married in Nov.  Right after Thanksgiving I put up our first tree.  Later, when  my sister-in-law dropped in for a visit, she looked at the brightly lit tree and said, "You can definitely tell Phil is married!"  It turned out that  he'd never put up a tree.  The closest he ever came to doing Christmas decorations was when he and a friend tried to see if they could make the silhouette of a man out of lights - as a joke.  Poor Phil! Times were definitely changing for him...
And then the Dec. that my mom died, exactly ten days after I got the call from the nurse saying mom was going, I got an early morning call - the exact same time as the week and a half before - telling me that my sister-in-law was in labor and her husband was taking her to the hospital. Both calls came at 5:30 in the morning. A piece of trivia perhaps, but it meant a lot to me (and still does) because somehow it seemed promising to have news of impending death eclipsed by the joyous news of impending birth.

Another scene flashes across my mind.  When our Russian daughter lived here and we made cookies for the neighbors.  As we took them around the neighborhood, she linked her arm in mine and said, "Let's sing!"  So we started singing carols as we walked from house to house. Before our last stop, we went back to the house to get, not cookies, but a bowl of homemade soup because the last person on our list was diabetic.  As we approached his house, singing, he opened the door and said he had been napping and waking up to the sound of carols made him think angels were at his door!  :)
As I think back over these memories, I really can't recall many gifts at all that I received - almost none - even though I know I was inundated with stuff when I was growing up and I've never been lacking for presents as an adult.  The things I would love to have now are not... things.  I would love to be able to go back and re-visit past Christmases - partly to check my memory, partly to see by-gone celebrations through adult eyes now.  Did my mom stress over getting the right present for everyone?  Did she worry about whether or not she spent the same amount on each person?
But most of all, I'd like to go back to see the people that I once knew and probably took for granted.  People I can't see any more but will someday.
When I get stressed over finding and wrapping the "perfect present", it helps me to stop and remember that in the long run, it really won't matter. At all.  What will matter is who I had the privilege of sharing Christmas with. And I hope that I have the wisdom to keep that in mind as I go through the coming days. 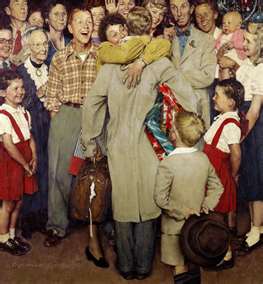