I don't know how long you have to wait before something can be considered a bona fide "memory" but I'm going to take a chance and call today's events a Christmas memory:)  After several hectic days of shopping, I had a real essence-of-Christmas day, at least in my opinion! 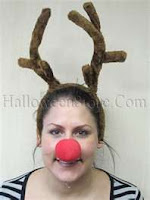 It didn't start out that promising. I woke up early, heard cars slushing down the street past our window, looked out and saw a steady rain coming down.  Perfect time to go back to sleep!  But I couldn't because...I, um, procrastinated yesterday and didn't make it to the grocery store.  I thought about how the traffic would only become exponentially worse as the day went on and shoppers turned out in full force and that thought was enough to galvanize me into getting out of bed and heading to Wal Mart by 8 a.m.  It turned out well - apparently the early hour and the rain kept the hordes away and I only had one other customer in front of me as I stood in line to check out.  Three days before Christmas, that's pretty awesome!  (Plus, it was kind of neat to walk in and see the WAl Mart greeter standing at the door with fake antlers on her head as well as a fake red nose that truly did glow..I had to laugh!) 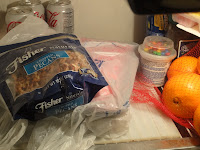 After I got home and we put the groceries  away, I couldn't find the pecans for the Waldorf salad.  I hunted and hunted until it suddenly hit me .. the only place left was the fridge!  I'm sorry.. I couldn't resist - had to take a picture of it!

Then  some long term friends of ours - a couple who have truly been there for us through thick and thin - dropped by to bring us homemade chicken pot pie and cake.  She's a great cook but mostly I just appreciated the time, effort and thought that went into baking all that for us.  We really love them and hope they know it!
About noon, almost  an hour before David had to be at work, he came out dressed in casual clothes - not work clothes - with  car keys in hand.  He said that three neighborhood boys had asked him to take them to the Dollar General store to buy spray paint.  They frequently ask him to take them places and he always does, one of the things I appreciate about our son.  However, I didn't want David to be running late for work so I told him I'd do it.
The boys range in age from 9 to 15 and they are all super polite, really good kids.  They had already walked to the store earlier today to buy the spray paint but apparently you have to be 18 to make a purchase like that.  The two younger ones wanted to spray paint their bikes (the ones Phil is frequently having to fix or air up) a blend of colors:  blue, black, red, and green!  The oldest one, who is very responsible, was going to supervise, i.e. try to keep them from accidentally painting themselves, the house, the yard, their mom's car, etc.
So we all piled into my car and I drove them the three blocks to the Dollar Store to get their paint.   As we were pulling out of our neighborhood, we saw David driving ahead of us and the 15-year-old said, "Mom!  There goes my brother to work!"
:)  Okay.  I am very white.  The boys are...not:)  So we go to the store and I have these three kids running around the store - all from different families so none of them look like siblings - helping me find tea candles for my candle holders, showing me which spray paint cans to get, and telling me about their day.  The nine year-old told me (very earnestly) that the new police lady who just moved onto our street has, wonder of wonders,  a dog.  And although he tried to help her get a dog food sack out of her trunk, he said he pulled on it but it just wouldn't budge.  I asked him what type of dog she had and he said he wasn't sure - it was either a   Canine or a German Shepherd.
He also told me that he got a new tooth.  We talked about what a bummer it is that the Tooth Fairy doesn't pay out for new teeth, only old teeth that have fallen out!  At this point, the 11 year-old said that when one of his teeth fell out, he forgot to tell his mom, put it under his pillow that night, and got... nothing.  The next day he told his mom about his tooth and voila!  The Tooth Fairy came that same evening... We talked about how that was a dead tip off that the Tooth Fairy only exists in the Santa Clause movies.

When we got to the counter to check out, I had three kids dancing  around me, calling me Mom.  The clerk wasn't sure what to make of it (and I certainly never asked her what she thought:) but I loved it!  After we left the store, we went to Sonic to celebrate Christmas - they didn't ask, I just offered.  Our orders varied:  cranberry vanilla slush for me, cherry limeade with extra cherry syrup for the 15 year-old, strawberry slush for the 11 year-old, and (my favorite:) Blue Coconut and Green Sour Apple Slush, which  had to be ordered precisely that way to satisfy the nine-year-old!  I have to admit: it was impressive!  We were all taken with the color scheme - everyone had to comment on it ... Now, I'm afraid I'll have to go order one for myself tomorrow just to satisfy my curiosity as to what it tastes like...
After I dropped the boys off ,   I went for a walk to deliver a last minute Christmas gift to a neighbor, visit with another - something I really enjoy doing.  On the way back, the boys had their bikes out, newly painted and I must say, Picasso would be proud!!!  Walking down the street, interacting with the neighbors, exchanging gifts - all this makes me feel like I'm in a Currier and Ives Christmas card  even though I don't think their pictures were set in the 'hood... :) 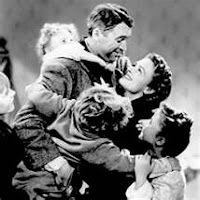 To round the day off,  this evening I went to Willow Springs Park to watch It's a Wonderful LIfe, something that's become a tradition.  As always, they had their home and the grounds of the park beautifully decorated and Lou Ann had fixed some neat Christmas treats.   It is one of the highlights of the season for me and although I missed having other family members with me this time around, I still enjoyed it.  Great movie, sweet people, beautiful lights.  And also a stillness as I was leaving - definitely different being in a semi-rural area as opposed to being in the city. I loved the quiet.
A beautiful silent night to end a spontaneous Christmas day.
Christmas distilled; tucked away in my mind.
God is so good...