What God obligated Himself to do...

Sometimes I wish I could speak more than one language.
I know of a college professor who said that he likes to read the Bible in more than one language because in that way, he picks up on different nuances and it just makes his time of prayer and meditation that much better.
In the book, These Words Changed Everything, David Aeilts describes how translating the Bible into a tribal language literally transformed a Mayan people group in Southern Mexico.  The translating project was long and arduous and at times, the missionaries struggled for words or phrases  in the Chamula language that would correctly express the meaning of certain Bible verses.  The translations they finally came up with sounded fairly natural in the Chamula language but awkward when translated word-for-word back into English.  Awkward but arresting in that they gave me a clearer insight into my own beliefs.  So I decided just to list some of these Chamula-back-into-English phrases and/or conversations here... if that makes any sense!
Enjoy!
First is a comment by one of the Chamula natives - a comment that he often used to encourage the other Chamula believers who had been run out of the tribe because of their Christian beliefs:   "We're not true believers if we only tell God what we want Him to do for us and fail to be willing to do whatever He asks of us."
Second, I liked this dialogue about the Gospel.  As the translator and the native assistant were working on Hebrews 8-11, the helper, Mariano, was suddenly struck by the message of the Gospel, amazed by the fact that this was an offer, not a request that you can't refuse type of thing.  So the translator asked Mariano to explain the offer.
Mariano explained how  God "... sent his Son to earth to live a perfect life and to die on the cross with the weight of all the sins ever committed, or ever to be committed, on his shoulders.  This Jesus was buried,and after three days he was raised from the dead.  He appeared to many people and was later taken to heaven, where he now sits at the right hand of his Father and speaks on behalf of his followers."
Then    Mariano said, "If I understand correctly...the sins of all the people in the world that have kept them from God are forgiven.  Jesus' sacrifice has wiped them all away.  Because of this, I'm hearing that any man, no matter who he is, may get up and go to God, Who sees him well.  No one will stop him, not even God himself."
"That's not all...In the book of Hebrews I'm hearing that a man may act like he's a good person but that it is impossible for him to meet God's standards," he said.  "There is really no point in trying.."
"I'm also hearing that, because of Jesus' sacrifice, God stands before us and points to Himself, saying, "Look, I make Myself responsible to do for you what you cannot do for yourself..."
At this point, the missionary asked Mariano how he would respond to such an offer.
The young man thought for a while and then said, "I would take seriously and hold in high esteem what God had obligated Himself to do."
Absolutely.... 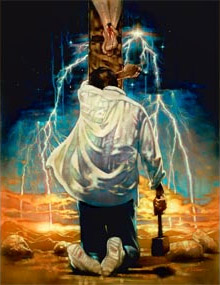 Hoping everyone has a great day today, in light of this amazing offer... Very thankful this beautiful Fall day that God obligated Himself to do what I could not do for myself... And that I was led to hold this offer in high esteem from an early age...
Posted by Unknown at 8:48 AM