I have been reading in Exodus 13 and 14 and it seems to me that it would be awesome to have God's presence going before me in a pillar of cloud by day and a pillar of fire by night.  What a way to avoid those tricky missteps in life while trying to find His will and receive His guidance!  (Not to mention how impressed the neighbors would be... And when you live in the 'hood, impressing the neighbors can be a big deal:)
Seriously, as I was reading chapter 14, I noticed some things about God's dealings with Moses and the people of Israel that I'd never seen before.  In verses 1 and 2, God speaks directly to Moses and I'm thinking, "Gosh! Isn't the cloud and the fire enough?  I mean, I'd really be happy with that type of concrete direction!"
But in verses 2-3, I got my first clue as to why God spoke to Moses even though He was already guiding them by going before them.  In these verses, he tells  Moses to turn back - a classic, "You want us  to do whuuutt???"  moment.  Backtracking doesn't always make sense, especially when Pharaoh is behind you, breathing down your neck so-to-speak.
Why would God tell Moses to do something like that?  All the Israelite people could figure was that they were going to be killed out in the wilderness!   No wonder God confirmed these instructions to Moses personally.  Frankly, if I had been in Moses group and I had seen the pillar going backwards, I would assume God's GPS  was glitching and been tempted to press on in whatever way seemed best to me.
In the next few verses, God explains that this meandering around on the part of the Jewish people will convince Pharaoh that they are trapped, hemmed in by the Red Sea - stuck in the wilderness.  And once Pharaoh is convinced of this, he will pursue Israel only to find he is the one who is trapped!  So, would God really do this???? Does He trick people??
I don't know if "trick" is the right word here - maybe "shrewd" would be better - is He shrewd in His dealings with recalcitrant people?  Like Pharaoh?
Psalms 18:25-27 says, "With the faithful You prove Yourself faithful; with the blameless man You prove Yourself blameless; with the pure You prove Yourself pure, but with the crooked You prove Yourself shrewd.  For you rescue an afflicted people, but you humble those with haughty eyes."
Something to think about.
At any rate, God leads the children of Israel to do something that must have seemed almost suicidal to them - turn back and camp in front of Baal-zephon (Baal was a pagan god) and, when they  turn around, voila;  they will notice some water,  the Red Sea to be exact, on the other side.  Nice...
Most of this story is pretty well known, thanks to Charlton Heston and Cecil B. DeMille.    But one other thing in the Scriptures caught my attention and that was the fact that "... the angel of God, who had been going before the camp of Israel, moved and went behind them; and the pillar of cloud moved from before them and stood behind them.  So it came between the camp of Egypt and the camp of Israel; and there was the cloud along with the darkness; yet it gave light at night. Thus the one did not come near the other all night."
I can see these two groups camping almost side-by-side through what must have seemed a very long night; yet no one from the enemy side came near the Jewish people because God stood between them and that was enough.
When they needed to move forward, His presence went in front of them.
When they needed protection behind them, His presence moved, apparently without fanfare, behind them.
As we approach Christmas and a new year, I find this comforting.  Even if He doesn't show up in fire by night and cloud by day, He is still the same as He ever was. He still guides.
And protects...
Those who love Him and try to follow Him, no matter how imperfectly they do it. 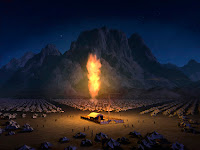