Have you ever taken an ex-con to get gas for his stranded vehicle?  It's interesting to stand there at the pump with a guy who has tattoos all over his arms, a face as tough as leather, and listen to him talk about how the first thing he did the last time he got out of prison was to try to steal a car... But automakers had installed anti-theft devices while he was a guest of the Feds  and he was out of luck - no wheels! So he had to get a job and get a vehicle the old-fashioned way!   That's what prison does for you... puts you behind the times...
This man and his family were our neighbors for several years and he taught us a lot:)
The first time we met him was through a neighborhood Bible club.  For the grand summer kick-off, each child in the club had to bring money to get into a public pool.  The idea was that the adults would provide hot dogs for the kids and sketch out the  weekly club agenda while the kids mostly just hung out and had fun.  When we got there, however, we learned that a church was hosting a free day at the pool for the community kids so our kids got in  free.
After our pool party ended, I debated whether to return the pool fee to the parents or not because we had put out a tidy sum on food, literature, games etc.  But in the end, we decided to give the pool fee back.  Our son and his friends were designated to do this.  But when they came to one house, they took one look at the dad who was working in the yard and that was all it took - they brought the money right back home and said one dad was too scary to talk to.
I thought, "How scary can the guy be?"  So Phil and I  walked up to the house, approached the man, thanked him for letting his kids go to the pool party, and gave him the money back. It was just a few dollars.  The man never greeted us, never said anything, just looked at the money, looked at us, and gave a sardonic half-smile.  We had turned and were walking away when he finally decided to speak and what came out of his mouth floored me.  He asked if he could go to church with us the next Sunday.
I told him he could but thought, "That will never happen."
My gut feeling was that if he did go to church, it would be just because he wanted a hand out.
The next Saturday, he asked me if they could go to church with us.  Again, I was floored and more than a little leery of his motives.  Since they had several kids, we had to go in two cars and on the way home from that first service, while I was still wondering what the deal was, the man said simply, "I've messed up my life. I don't have anywhere else to go. I figure God is my last chance."
Over the weeks we watched him and his kids, trying to discern what was real and what wasn't about them. It wasn't easy. The kids were highly manipulative; the mom was sweet, almost childlike but also hearing voices routinely and the dad was trying to hold everything together but, as we would learn over time, he was also unable to resist the occasional joint when  stress got to him - which was often. He also had trouble resisting  get-rich schemes from his crooked buddies.
At times, things seemed hopeless. Drama was the order of almost every day for that family.  But eventually, the dad gave his life to Christ and got serious with a 12-step recovery program.  How did we know that he was serious, aside from the fact that he stayed with the meetings and began to share his story?
One Sunday morning we saw him put a twenty-dollar bill into the offering plate and take out  a ten-dollar bill :)  (Something I'll never forget!)  It was the first time we'd ever seen anyone make change out of a church collection plate and we were all open-mouthed at the sight!  It wasn't until later that we realized he had put in 50% of all the cash he had for that week while we had put in... nothing that particular Sunday.
The family eventually moved away and whether our friend continued on in faith is uncertain. Unless he found a mentor, the chances are that he didn't.
But while we were with him, the dad showed enough evidence to be "convicted" for being a Christ-follower.
When Paul wrote to Titus in the New Testament, he mentioned people who "profess to know God, but by their deeds they deny Him."   Our friend became the opposite: someone who, by his deeds - however unorthodox they were - showed that he knew God.
Over the years, I've known others who  looked the look and at times talked the talk  around us but their deeds and words were not always in  sync...
I guess I'm just sayin' that maybe it's better to be a weather-beaten, tattooed ex-con who makes change out of the collection plate than to be a solid middle-class citizen who uses "Christ" and "God" liberally as cuss words, watches filth on television,  and cuts corners constantly at work in order to make the most money possible..
Just a thought...
Thankful for the things an ex-con taught us about being real in both what you say and do. 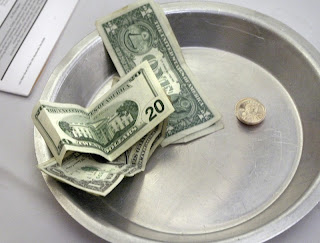