Nearer than it's ever been....

I thought I'd write about something pleasant... like childbirth...
Seriously, as I approached my due date with David twenty-one years ago,  my anxiety increased significantly. I had had several friends talk about being convinced they were in labor, only to be sent home with gas pains and somehow, that seemed like the worst thing that could happen to me! (It wasn't, by the way...)  At any rate, I was determined that it would not happen to me!
On Sept. 8, 1990, I began to have pains every ten minutes.  They steadily increased in intensity and frequency so we headed to the hospital. By the time I got there, the pains were coming every 3 minutes. Still, I was determined not to proudly walk into the hospital, head held high, only to learn that instead of being on the verge of bringing a new life into the world, I was about to be told to drop the Mexican food from my daily diet, take Beanos and go back home.
Phil, on the other hand, was determined that I wouldn't have the baby in the car.  So we argued.  On the parking lot of Baptist hospital.  His point was that gas pains don't come every three minutes. My point was that I wasn't going to look like a fool, walking in with luggage, pillow, purse, etc. only to be sent right back out.  We compromised. Phil agreed to carry part of my stuff into the hospital - so it wouldn't look like we were going for a prolonged stay - and I agreed to walk inside the building.
I quickly found it wasn't that simple...
By the time the  elevator opened onto the birthing floor, I was doubled over,  white as a sheet, and moving like Father Time with a load of stuff on his back as I shuffled  towards the nurse's desk. Even then, as I got close to the desk, still hanging onto my pride (as well as my extended abdomen), I huffed, "I don't...  know if.... I'm in labor.... but... I ... know...... I......hurt...."  The nurse simply said, "Honey, you are in labor"before helping me to a birthing room.  At the time I thought, "How can she know for sure?"  Duhhhhhhh.....
Now I look back and think: how could I have been so blind?  How could I have had any doubt that I was in hard labor?
The answer is pride.  I was so concerned about looking foolish that I ignored obvious signs of impending birth. Had I continued to do so, David would have been born in an Isuzu two-door compact vehicle, just yards away from a hospital with state-of-the-art birthing facilities.
Jesus spoke about birth pangs that will come prior to His return.  Sometimes I'm uncomfortable writing/thinking about His words on this subject because it is often associated with idiocy, just like birth pains are sometimes associated with gas pains...
But then I thought about it like this.
What if I lived back in 1939 and  admired President Franklin Roosevelt? What if I followed all his speeches, believed strongly in his New Deal Program and accepted whatever he said as the absolute truth. Until he talked about the possibility of  the U.S. going into war (as he did with his  private friends).  What if, at that point, I tuned him out and refused to hear what he was saying, simply because I didn't like the subject, sort of putting my hands over my ears while singing, "la la la la la..." as loud as I could? Or maybe even more to the point, just dismissing those words, totally ignoring them as if he'd never said them? Or maybe his friends had misquoted him on that subject?
President Obama declared 89 natural disasters in the year 2011. Japan had an unprecedented 9 point earthquake that shifted the earth on it's axis and created a tsunami of incredible proportions. (Sumatra had a similar one in 2005 and Haiti had a devastating one in 2010) The Middle East has been in political turmoil this year, starting in January, like it hasn't been since WWI, WWII days.  Major government leaders in that area have fallen like dominoes and it's still unclear who will emerge to take their places.  And the global economic situation is still very fragile -just ask Greece and Spain.
Am I saying that the end is near and that everyone should circle May 21, 2012 in red on their calendars?  No. It'll just look odd on May 22...  Am I saying that everyone should have one heck of a party as 2012 dawns because, in accordance with Mayan philosophy, 2012 will be our last?  Definitely not. (As a former colleague of mine once said, if the Mayans were that good at predicting things, they would have been prepared for the Spanish...)  But I am saying that gas pains don't come every 3 minutes...
Seriously, Jesus predicted that natural disasters, wars, etc. would increase as the time of His return drew near, as the final showdown between good and evil drew to a climactic finale.  When that finale will happen, no one knows.     But we can recognize contractions and if 2011 wasn't a world-wide contraction, I would have to wonder what it was.
In Luke 21:28, Jesus said, "But when these things begin to take place, straighten up and lift up your heads, because your redemption is drawing near."  Whether Christ returns tomorrow, next year or a hundred years from now, we still have reason to straighten up and lift up our heads.  At the very least, His return is nearer now than it ever has been. 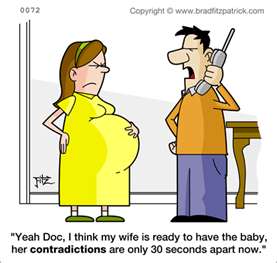