I once heard a story about a rebellious little boy who was forced to sit in a corner for his bad behavior. After his teacher finally got him to sit facing the wall, he was heard to say, "I may be sitting down on the outside but .. I'm standing up on the inside!"
Sometimes, even as  a "grown-up", I can identify!
Even though I know this is not the right thing to do, there was a time when I came home on a Friday after work and told God that if He wanted me to sit, I would stand and if He wanted me to stand, I would sit.  I went on to say that I would not be praying or doing anything else I was supposed to do that particular weekend - basically sort of "signing off" spiritually as it were. It was my first Mother's Day since my mom had died.  The month before on April 16th my mom would have turned 72; my dad would have turned 79. At that point, my dad had been gone for 8 months; mom had been gone for 5 months.   I was not handling things well.
I was true to my rebellious word throughout that weekend. Sunday morning I woke up determined not to go to church.  But I knew my husband would question my decision and gently  encourage me to go on anyway.  So I was still trying to figure out how to get out of going  without revealing my inner rebellion when I walked into our living room and saw, sitting on a chair, this beautifully wrapped present with a spectacular bow.  It was from my brother's girlfriend, whom I am blessed to have as a sister-in-law now.
I opened up the present and saw, to my disappointment, that it was a book by a writer I had already dismissed as someone who was not my "cup of tea."  But then it hit me that I could sit down, idly flip through the paperback and pretend to be totally absorbed in it when my husband came into the room later on. At that point, I would basically lie and tell him that I had become so engrossed in the book that I had lost track of time and couldn't get ready in time for church sooo... he would just have to go without me.
With that in mind, I picked up the book and began to read. To my surprise, the first few pages resonated deeply with my broken and angry heart.  Before I knew it, I was deeply into the book and when my husband asked me about going to church, without a word I got up, got ready in minutes and went on to the service.  I was no longer prepared to lie; things were already changing heart-wise for me.  It was tough to sit through the worship time but I made it.  And then I went right back to my new book.
Reading it lifted me from angry despair to the place where I could bring my pain to God instead of cutting myself off from Him.  I came to understand that God wants us to be honest with Him, even when we're hurting, and that when we are in pain, confused, or angry, His love is not diminished towards us.  In other words, He doesn't cut us off from His love but we can  cut ourselves off. At the same time, all it takes is honest communication to get the relationship going again.
And that's what I needed - to feel His love once more.  Why I ever thought cutting myself off from His love would make me feel better, I don't know.
For the next three days as I drove to and from work, I kept asking, "Why would God go to the trouble to get a book to me (through my future sister-in-law) that I would never have bought for myself? A book  that touched my wounded heart and helped bring me back to God? And at a time  when I was nothing but an angry mess?"
It made no sense to me.
If a child of mine looked at me and said, "If you tell me to sit, I'm going to stand..!!!" I definitely would not be giving that child a present... Yet, honestly, that was exactly  what God did for me on that particular Mother's Day.
Each day as I drove to and from work, I worried this question around like a dog worrying a bone, as the saying goes. And each day I cried.  And each day I repeatedly said, "Why, God?  Why would You reach out to me this way when I was so angry with You?"
And finally, on the third day, I got His answer.
"This is grace, Cathy. This is just a small picture of what happened on the cross - same principle.  Once you were lost in sin, alienated from My love and at that time I sent you a gift -  my only Son - to  die  in your place, so that You and I could be reconciled, so that you could know My love.   It's all grace."
The book was  Abba's Child by Brennan Manning.
Today, I saw his autobiography  and bought it on my Kindle. He apparently wrote it hoping "a crumb of grace" might fall into someone's life via the telling of the first part of his life, when he was apparently searching for God.
You can be sure it will go with me on our upcoming weekend away from home.
Today - and every day - a crumb of grace sounds pretty good... 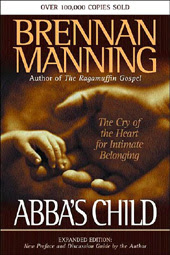 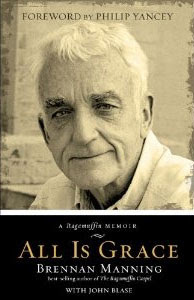