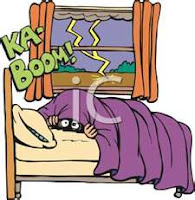 We are in that period of tension, waiting to see if stormy weather will hit this  evening as predicted.  But for right now, there is a slight breeze and the temperatures have been moderate, pleasant.
At an early age, I learned to fear storms. My grandmother was afraid of them and fear is definitely contagious.  My mom said that when she was a girl and a storm would crop up at night, Grandma would make them get up and get dressed  in their good clothes, saying that none of her family was going to be blown away in dirty underwear...!  (This was her standard argument for making me put on clean clothes for church,etc... But what if you were in a car accident and someone saw your underwear ?  Really, my grandmother was a little weird - not about the clean clothes thing but in her rationale for wearing them..)
At any rate, I learned to fear severe weather predictions, so much so that for years I absolutely would not watch the weather if I thought there might be a problem  and I wouldn't allow anyone to tell me of impending storms until the day of... Because otherwise, I would simply worry for two or three days prior to the event.
When David was young, we had a new family move onto our street.  Over the years,  as we became friends, they invited us to sit in their basement whenever severe weather was impending.  I was so relieved and grateful to have a place of safety to run to. However, even there I didn't feel totally safe, wondering what if...  What if the upper level fell in on us and crushed us?  What if the huge tree next to their house blew over and trapped us?  What if...
One day I was the only one home and the sky just turned an angry, opaque black. Before I could get to my neighbor's house, part of the sky turned green and I was terrified.  But I made it to safety!  However, there was  only one person in the house, someone I didn't know very well and as the time dragged on while the storm system  raged outside, I felt the conversation dragged also, was awkward to say the least.   Some of the things this person said made me feel vaguely uncomfortable and at times it crossed my mind that maybe it wasn't such a good idea for  just the two of us to be sitting together, alone in that big house.  So, as soon as things died down a bit,  I decided to take my chances with the rest of the weather system,  thanked the guy for letting me stay and then hurried on home. It wasn't until much later that I learned that the family didn't even like this relative and that the guy had been in prison for some serious things and had never shown much desire to reform after his stint was over.
Bottom line:  my fear had actually driven me to take refuge in a place that could have been more dangerous than the perceived threat I was running from.  Sometimes it's just hard to know where to run, especially when panicky fear is in the driver's seat.
And sometimes when we have several episodes of really bad storms across the South, I still wish for a storm cellar or basement of our own.   But over the years, I've learned to take refuge in Him first- to the point that even though I knew bad weather might be coming this evening and, yes, we may be sitting in the spare bedroom closet with pillows around us, still, I could enjoy the earlier part of the day. And did.
Psalms 34:1 says, "I will bless the Lord at all times, His praise shall be continually in my mouth."
Or Slava Bogu! as I've learned from the book, Goodbye is Not Forever.  :)
Why? Praise helps counteract fear...:)
And it also helps that my desk calendar for today says:
He who fears the Lord has a secure fortress, and for his children it will be a refuge.  Proverbs 14:16
Sometimes it helps to fear/respect just One thing (person) as opposed to  many things/people... 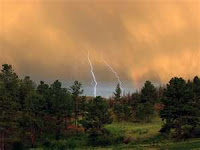