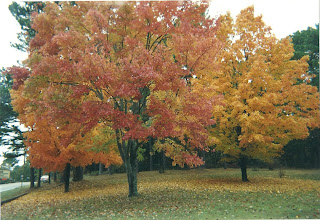 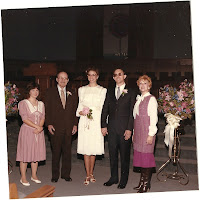 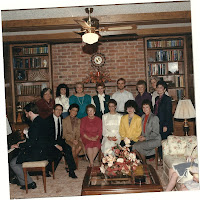 Twenty-five years ago, almost to the day... Phil and I were married.  It had just been my mom and I living together pretty much since I was fifteen-years-old.  She was 62 and in bad health at the time of our wedding and it was a threatening situation for her.  She didn't want to live alone and as I now approach 60, I can understand that.  Also, she had had  a terrible marriage and she feared I would as well.  Remaining single seemed the safest and wisest thing to do, based on her personal experience.
Our marriage not only disrupted her life but others as well.  This past weekend, Phil and I were trying to recount how many people he moved in the weeks surrounding our marriage and it was quite a few.  At times, it seemed like the hassle of it all and the stress of it all would kill someone if not us and to this day, I remember walking down the aisle, hoping my mom's heart condition would not send her to the ER.  Thankfully, she made it fine and we were soon on our way to Eureka Springs!  What a wonderful feeling it was to know that we were actually married and everyone had survived!!! :)
Phil and I took the longer, scenic route, which we laugh about now because we left Little Rock in late afternoon and by the time we hit the "scenic" part of the trip, there was nothing to see but pitch dark since there are no street lights along deserted mountain roads. At one point, as we were traveling through some very thick fog, I clearly heard the sound of a low fog horn.  I was startled, looking around,  wondering what on earth was happening... To my surprise, it was my new husband whom I later learned could not only do a great imitation of a fog horn but also of a brass band...  At another point in the trip, Phil pulled our little car over to the side, we both got out and he said, "Isn't this wonderful!!"  I looked around, totally clueless, wondering, "What? What is so wonderful?"  As he explained to me how great it was just to stand in the countryside where a person could actually see the stars in the night sky, I began to look nervously over my shoulder, expecting a high-strung deer or  a hunter who was just high.. .to come leaping out of the woods and do bodily harm to us.  We didn't stand there long, for which I was thankful.  Basically, I was pretty-much a city girl and at heart, he loved the country.
Maybe that is why Eureka Springs was the perfect place for us on our honeymoon.  At Redbud Valley Resort, we were surrounded by hills, trees, water, and yes, a view of a crisp night sky that was unobstructed by mercury vapor lights.  However, there were some wonderful (and well-lit) shops nearby built right into the side of the mountain and a Christmas shop that seemed built just for me!
Going back this weekend was a blessing. Not an unmitigated blessing because we were acutely aware of how time has passed, leaving our hip and knee joints slightly less limber than they once were!  But a deep, abiding  blessing, just to realize how far God has brought us over the past 25 years and how good He has been to us.  Basically, he took two very self-willed and slightly ignorant people and somehow blended us into a couple who care deeply about each other and now, after all these years, can often even complete each other's thoughts, in a good way!
For this, we are both grateful this Thanksgiving season! 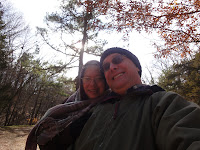