Ten on the Tenth - Bananas, ice cream, and drive-throughs....

I'm about to finish the book, Good-bye Is Not Forever by Amy George.  Somehow, Amy and her family - all except her dad - were eventually able to emigrate to the U.S. and that's why the book even exists.   However, because her father had been a political prisoner, he was constantly denied a visa to even visit the States.   He simply knew too much and the Soviet govt. didn't want him telling tales in the West.
Then, when Amy was forty with kids of her own, one day her mom called her and told her to sit down: a worker at an airport  in Chicago had just contacted them. They had a 79-year-old man who spoke no English and just had a cane,a passport, and an address book with him. He was sick, frail and crying!  It was her father!
I won't spoil the book by telling you everything.  But I can tell you that her descriptions of how the U.S. looked to her dad were eye-opening, to say the least.  Yesterday I had oatmeal, a banana and a bran muffin at Cracker Barrel for breakfast. It seemed to me like  a healthy "sacrifice" to make in light of all the other tasty  items on the menu. Not any more! 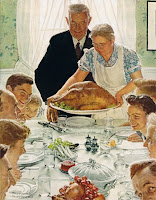 Today, seriously, I am thankful for:

1. Bananas.  Her father had lost all of his teeth from malnutrition while working in a Soviet mine in Siberia.  He had false teeth that were poorly made and little help, so he was limited in what he could eat.  At Amy's house, he ate his first banana ever! Lovingly. Wonderingly.  Savoring every bite, wanting to know what it was called.  After eating two, he announced that if he could have a banana and a piece of black bread every day for the rest of his life, he would be happy.

2.  That was until he discovered soft serve ice cream:) ! He had never had that before either- ate his first ice cream cone as if it were nectar from the gods. When Amy saw how much he loved a simple  ice cream treat from Dairy Queen, she made a note to get him one every day during his visit to the States.

3.  Grocery stores with plenty of food on the shelves. When Amy took him to a small grocery store near her home, he marveled at the fruits and vegetables, didn't know the names of many of them and so was constantly asking, "What is that?"  His first question, however, was:  is this a store for tourists?  In Soviet Russia back in the sixties and seventies, some stores were well-stocked  for the benefit of tourists, a form of propaganda. Often, the  stores the locals used were pretty much bare.

4.  The fact that we have cars in abundance here. Her father had never driven one.

5.  The fact that we have drive-through windows at restaurants, banks, drug stores, etc.  Since her father came from a small farming village in the Ukraine, he had never seen or heard of such conveniences.

6.  The fact that I don't have to be afraid when I go through a drive-through at the bank.  One day Amy took her father with her on some errands. When they went through the bank drive-through, her father stiffened and looked worried.  He didn't relax until they had left.  He thought the drive-through was a police check point and that they were going to examine his papers! His papers were in order but in Soviet Russia, that meant nothing. Governments were not to be trusted; they were to be feared... 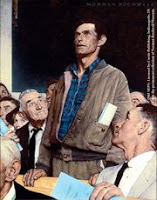 7.  In fact, no one apart from family was to be trusted. Ever.    Restricting conversations and letters to the most innocuous subjects was deeply ingrained in survivors of Stalin's day. So much so that her mother and father never completely got over it. So today I'm thankful for freedom of speech.

8. I'm also thankful for the fact that God answers prayers and does the things no one else can do. After Amy and Bob became Christians, Amy wrote to her father as cautiously as she could about God in order to avoid getting him into trouble.    He wrote back  that he was an atheist.  So she and her husband began to pray that someone in the Ukraine would share Christ with him. Instead, God opened the way for her father to come to Texas, where they were able to share Christ with him and he believed. 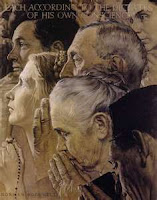 9.  And I'm thankful that I can own a Bible.. The father devoured the Russian Bible Amy had in her home. He read it constantly, even slept with it. Loved it. But sadly, he was afraid to take it back to the USSR for fear it would cause him to be sent back to Siberia so when he boarded the plane, he had to leave it behind.  He really wanted it but he couldn't have it.

10.  The fact that I've never had to live in fear, experience war, or be forced to give up all rights under a totalitarian system.  For twenty years, Amy's family had no idea if her father was alive or dead. Throughout those years, they just existed as slave laborers for one corrupt system or another. But they never gave up their humanity, sharing what they had even if it was just two boiled potatoes to eat. (In fact, she said that her loved ones never ate anything without sharing it with everyone in their family - for her, sharing food made it that much better!)  .And I think God honored that by bringing them through all that they endured and providing for them in the most unlikely of ways.

Good-bye Is Not Forever. Because of this book, I think Thanksgiving will be a little more meaningful this year.  Christmas too!
Posted by Unknown at 12:12 PM