Through the lens of faith...

I once read a book about Lebanon and I'm afraid the only thing I remember from it is this  story:  Lebanon experienced civil war for two decades and over time, the beautiful country was nearly destroyed by rockets, missiles, grenades, sniper attacks, etc.  Buildings in Beirut that were partially damaged were quickly taken over and made into strongholds for different militias, complete with barricades and barbed wire.  To say the people were in danger is an understatement.
Whereas we in Arkansas have tornado warning systems, they had rocket alerts and when the sirens sounded, the Lebanese people knew to run for their lives and stay in shelters until the all-clear was given.  But still, it was never really safe.

In fact, it was such a dangerous place that a parrot in a local bar learned to  imitate the whistling sound of an incoming bomb as well as the explosion that followed!  The bird had heard this sound so much that he could imitate it perfectly!
The author of this story said that the Lebanese people played "mind games" in order to survive the hostilities.  For example, if the all-clear sounded in Beirut and then thirty minutes later, a pedestrian was killed by a stray bullet, the people would talk about this incident, trying to rationalize why this person died the way he did.  To explain this tragedy, they would say things like, "Everyone knows that you don't go out on the streets until an hour after the all-clear signal has been given!! That is why this person was killed... he went out on the street too soon. He should have waited...."
In reality, there is no magic formula to protect pedestrians in a war zone. Warning systems help but they can't be 100% effective.
Why am I writing about this?

Today, a ministry website posted pictures of Haiti after the devastating earthquake of 2010.  They showed several pictures of ruined buildings, people sifting through the rubble, and also  -which was very interesting to me - Haitian people praising God with uplifted hands and heartfelt devotion on their faces, even as they stood in the middle of what looked like a war zone.
The images were a powerful testimony to what the Haitian people suffered and still suffer as they slowly rebuild.  But they were an equally powerful testimony to the words of Romans 8:35-39

Who shall separate us from the love of Christ? Shall trouble or hardship or persecution or famine or nakedness or danger or sword? As it is written:

“For your sake we face death all day long;
we are considered as sheep to be slaughtered.”
No, in all these things we are more than conquerors through him who loved us. For I am convinced that neither death nor life, neither angels nor demons, neither the present nor the future, nor any powers,  neither height nor depth, nor anything else in all creation, will be able to separate us from the love of God that is in Christ Jesus our Lord.

One picture showed the remnants of what had clearly been a beautiful cathedral. And beside the picture, someone had commented, "It must not have been a true church of God because God wouldn't destroy his own church unless it went astray."
Ummmm... with all the hundreds of thousands of churches on the planet, I'm pretty sure that a fair number  of them, human nature being what it is,  are not "true" and, yet, as far as I know, there hasn't been a wholesale collapse of  structures housing "untrue" congregations.
I thought about the story of the man born blind in John 9:1-3, where the disciples asked Jesus why the man was afflicted in such a way - was it because his parents sinned?  The answer was "no..."  The man's blindness was not a judgment for sin,  far from it.  Instead, his affliction would be  used to display God's glory and mercy.

I thought about Jim Elliot, who, along with 4 other young men, died in Ecuador in 1956 trying to take the Gospel to a remote and violent Indian tribe. He is remembered for his martyrdom as well as  for his saying: he is no fool who gives up that which he cannot keep in order to gain that which he cannot lose.  Jim and the other young men believed this and proved it both in life and in death.
Maybe less known however, is this fact: when Jim first went to Ecuador, he and another man built a church base at Shandia.  Just as they were finishing this backbreaking work in the heart of the jungle, the area experienced a devastating flood and all of their work was washed away.  Jim's comment was that he had heard the voice of God in the sound of many waters. 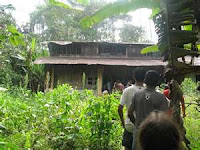 Did that mean his ministry was dishonoring to God, that the congregation he was building was "untrue" to the Gospel and that's why God allowed this atypical flood to wash away their new church building?
I don't think so.  (Fifty years after the event, it came out "accidentally" that the Indians who killed the 5 missionaries had seen a lot of people wearing white up  in the sky and had also heard strange music.  Sounds like the five men received a warm welcome Home to me. Not what you would expect for ministers who were "untrue".)
The truth is, life can be scary.  I wish it weren't so but the Bible doesn't pull any punches when it says we will have tribulation here on earth and when it speaks in terms of spiritual warfare. Faithful followers of God live in a war zone.  And honestly, if we  stationed parrots amid every humble, God-honoring congregation, the birds would be squawking "in-coming!!!" so fast it would make our heads spin!
God doesn't promise that "good" churches and "good" people will be exempt from natural disasters and afflictions  while "bad" ones will be decimated here on earth.  But He does promise that He will never leave us and that the things we suffer here will seem "momentary" and "light" once we get to Heaven.  (II Corinthians 4:17-18)
Honestly, when I get scared, I sometimes wish I could find a magic formula - if I go to this church x number of times a week (or do this particular Bible study course or give to this ministry or feed the poor), then  I won't suffer like so-and-so. But I just don't see that in the Bible. Instead, I see that He is faithful, that He is merciful, that He is always with His children and that He is able to guard what we've entrusted to Him until the day when we meet the Lord Jesus face to face.
And when I look through the lens of faith, I see that is enough...
Posted by Unknown at 5:58 PM