Many years ago I read a little book called, Turtle on a Fence Post.     The author, Allan Emery, is not well-known and his book has been out of print for many years- it was never a best-seller.
But  I would think he has a good shot at being a Hall of Faith-er.
One of the things that he did stands out in my mind and has for decades.
But first, a little background.
I guess it could be said that Allan was born into privilege and prestige.  Certainly his family owned a wool business that had generated a very good income for generations.  But his parents also taught him that everything they owned was simply a tool to be used for God.  When he turned sixteen and they presented him with a sleek new sailboat, a family tradition, his father surprised him by saying quietly, "I know you will use this to draw the boys in your Sunday School class to the Lord."  And he did.
When his father  heard about a prominent man who had been found intoxicated, he sent Allan to look after the man and quietly bring him to their house.  Allan wasn't very happy with this assignment but he and his brother did it.  When they got the man to their house, Allan found his mom had put fresh sheets and her best hand-sewn linen bedspread on the guest room bed, just for this man.     He asked his mom why she did that, knowing that when the man woke up, he would probably be sick.  Her answer was  that she knew the gentleman would feel bad about what had happened when he awakened and she wanted him to know, first thing,  that he was their honored guest. She also used this opportunity to teach Allan that  if you belong to the Lord, you always give your best for Him. It was a lesson he carried with him throughout his adult life.
By the time Allan became an adult, he had a solid walk with the Lord and like his father before him, he was known for integrity.  The family business continued to do well.    However, as the years passed, Allan realized that in time, the new synthetic materials would run his wool company into the ground. So, in middle age, he had a decision to make: should he continue to run the business for as long as it was making any type of profit? Or should he liquidate while it was still at it's peak?
This may sound like a simple question but for him it was a scary one. All he knew was the family wool business; it was all he had ever done.
As he asked God for wisdom about this, however, he came to the place where he felt that God was turning the question right  back on him, saying:  Allan, if you were a company shareholder who didn't understand how the market was gradually changing, what would you want the company to do?     The answer was to liquidate while the stockholders could still get top dollar for their investment.
So that's what Allan did:  he dissolved a business while it was financially profitable and when he had no future prospects.
It was a faith move and one that was not immediately honored.  What I mean by that is this:  sometimes we step out in faith, do something hard or risky, and we think that God will quickly step in, pat us on the back and give us something better.  But he doesn't always do that right off the bat and I think this is one reason Allan's book resonated with me so much when I was in my twenties.
When I was growing up, most of the Christian books I read were along the lines of:  we believed, we acted, and God blessed.  When I got into my college years and young adult years, I found other books, such as Turtle on a Fence Post, that gave a different picture of walking with God and I'm glad that I did.  When I was about 24, I broke off a relationship with  a young man whom I had dated for four years. He was a wonderful person but he wasn't a Christian.  I was really just starting to grow in faith and I seriously thought that by ending this relationship, God would bring a new person, a Christian, into my life ASAP; in other words, He would reward me for my sacrifice :) (Sounds silly, now, I know!)   When that didn't happen and six months later, I still hadn't even had a date, I got depressed.  I thought something had gone wrong - the magic formula hadn't worked!  And that's when Allan's book began to speak to my heart in ways that I can't even begin to describe here.
I can say that during this time of testing in Allan's own life, he  meditated on the story of Elijah, the prophet, who was led by God to a brook and fed miraculously by birds.  And then, for some inexplicable reason, God just allowed the brook in Elijah's hiding place to dry up!  During a three year dry season!!  For no reason (that Elijah could see)!  (I Kings 17:7-9).  Allan felt that he could identify with the prophet and later on, he would refer to this difficult time in his life as his "dried-up brook" period.    And even later still, when he wrote his book, he would include his own paraphrase of Galatians 2:20 in the text, a quote that I have written in the front of most of my Bibles over the years:  "For one who is crucified with Christ, hanging on a cross, there is no comfortable future - no career plan.  There is the freedom of being with Christ, sharing His cross, and the joy of facing an eternity with Him."  I've always loved that quote even though in my own personal life, I haven't always had the courage to act on it.

Eventually, however,  Allan's time of testing came to an end.  He had a  friend who wanted to start a new business - one  that would provide hospitals with custodial services, clean linens, etc. This man  thought that Allan would be great as a personnel manager in his new company.  Allen was pretty convinced that the man was wrong so he turned down the offer - he couldn't see himself working in dirty linens and managing a bunch of people.  Still, he agreed to meet with this man and several others in order to pray specifically about this job offer.  When the prayer time finished, Allan burst into tears and told the men he knew God wanted him to accept the job.  God had convicted Allan of pride, hence the tears. But He also gave Allan a deep sense of peace - he knew he was headed into the  the center of his Father's will, even though he never dreamed his Father's will would include dirty laundry! (When I prayed for God's will in a marriage partner, I made the same mistake - never thinking that marriage meant years and years of doing dirty laundry.. ha!)
The bottom line is that Allan took the job and found his months of training were difficult.   When he first offered the job, his friend told Allan upfront that the only way to learn the job was from the ground up. This meant that Allan's first weeks would be spent  filling the positions that he would later supervise, which meant that his first job would involve pushing a broom and a mop through the halls of a hospital, surrounded by doctors and highly trained medical staff.  To say he would be low man on the totem pole would be an understatement.
He found that sometimes even emptying the trash requires faith.  God, are You sure this is what You want me to be doing?    After a few weeks of this, he got to move up the ladder! He graduated  to collecting, washing and ironing dirty bed linens.  What a promotion....  As you can imagine,  God taught him some valuable lessons during this training period, one of which was to never look down on a person and/or treat them rudely simply because of the job they did. Before this, he had unknowingly accepted the worldly wisdom which says rank deserves its privileges.
There are many other things in his little book that resonated with me; none of them that dramatic.  But still, changing careers in mid-stream, liquidating the only career he'd ever known, a source of family pride, and then sitting quietly with no prospects in middle age  - simply because God had led him to do all that - to me, that would put Allan in the Hall of Faith-ers. 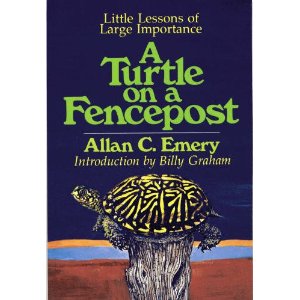