Some things are overwhelming.
And that's not necessarily a bad thing.
In Dec. of 1995, my mom died of cancer. She was not only my mom but also my shopping buddy, my adviser, and in many ways, my mentor.  When she transitioned to Heaven, there was a huge void in my life as well as in my heart.  Time hung heavy on my hands as I wrestled with grief.
In March of 1996, I decided it was no good sitting around wringing my hands and so I volunteered to work with a ministry I had heard about at church: International Friendship Organization (IFO).   I wasn't sure if I could do it or not and had no idea how much it would change our lives when I filled out an application.

At first we just opted for a friendship partner, which meant we agreed to  contact our student once a week and also to include  them in a couple of family activities twice a month.  I still remember the first time we met our Japanese partner, T.  We took her out to lunch with us on a Sunday afternoon.  Looking back, I think we were all a little nervous and when the food came, my anxiety only heightened.  We had recommended the chicken fried steak with gravy and when it arrived, I saw a momentary expression of concern flicker across her face.  She quickly recovered and was very gracious about it all  but that first initial look told me that gravy was not a big hit in Tokyo... Then when she asked for iced coffee, we were all flummoxed and the waiter never got it right. I think they finally brought her a  glass of ice and a cup of hot coffee  (At that time, iced coffee and Arkansas hadn't really shaken hands yet...)  Later, she would get her own back by introducing me to Sushi, something I had never seen before but have eaten plenty of since. 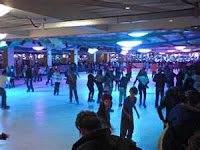 Over the next four years, T. became a part of our family, an amazing person who fit well into every group that she was a part of.  She had been a high school teacher in a private school in her home country and was here to get her Master's degree.  She was very athletic and graceful - she taught our son to ice skate and also helped him learn to swim.
While we were at the skating rink one day, she skated over to check on me where I was sitting. As she started back down the ramp headed towards the ice, she looked back over her shoulder and yelled  "Fire!"  I jumped and started looking around in all directions.  She yelled, "No!  Fire!!" This time I jumped up and headed to the rail where I would be closest to David so I could yell at him to get off the floor.  She hastily came back to me and said, "No! Fire!" and pointed to the fire place on the opposite side of the rink, something I hadn't noticed before.  She wasn't trying to test Oliver Wendell Holme's dictum about shouting fire falsely in a crowded skating rink.. er.. theater.. but for a minute, I was ready to book it with both feet out of that building, proving that the illustrious judge had a valid point...  We both laughed when she realized I finally understood that she was concerned about me being cold and simply wanted me to go sit next to the fireplace.