Writing comes easily for me. And normally the more deeply I feel about something, the easier it is for me to write about it.  But that is not always the case.
On Wed. evening, my husband stood in the pouring rain, in the dark, under an eave of the roof with water cascading down on him while I stood inside my sister-in-law's house, just on the other side of the wall from where he was working. He was stapling black plastic over his sister's  broken window. I was sweeping up shattered glass on the other side.  There was a brick lying on the floor beside the window fragments.
It was a defining moment for me in some ways.  And one that caused me not to want to blog for several days, while I processed what had happened.
The day itself started  well.  I took my niece to school - we were pretty much zombies like we normally are first thing in the morning but had a good morning prayer accompanied by a Mickey D. sandwich. As I recall, she quietly worked on her math as I drove through light traffic.
At one point, she realized she  had left her purse at home - we discussed it and decided that she could make it without it. All she really needed was her house key and I had an extra key to her house so I told her I would pick her up after school and take her home. At the time, we had no idea that she'd lose all the valuable possessions in her purse before the day was over.
Sometimes big things hinge on small decisions.  Now, knowing what happened later, I wonder if we'd make the same judgement call.  I have had to come to the place where I realize it doesn't really matter; hindsight may be 20/20 but... it's also pretty useless. Paul, in Philippians,  talked about forgetting the things that are past and moving on to what is ahead.  And I think that applies to both big things and small things as well... So we are moving on...
On the way home from school that afternoon, we were more animated, laughing about nothing, having a good time.  I pulled up in her drive and handed her the extra house key.   She opened the door and brought the  key back to me with a smile and a "thanks!" I drove away but two minutes later, she called and said someone had broken into their home. I immediately turned around and was back at her home within seconds.

She's 16 and the thing that has not faded from my mind in all this time  is not the brokenness of the window or the scattering of their personal and private possessions all over the beds and floors but rather the brokenness in her young voice as she ran to me and sobbed out the story of what she had discovered.
Years ago a woman wrote her account of being diagnosed with breast cancer and this was the title of her book, First, You Cry.  I realized last Wed. that sometimes crying is the wisest thing you can do.  It's honest and it gets to the heart of the matter.
She also had the presence of mind not to stay in the home and to avoid touching things as she retraced her steps back to   the front porch.  Within seconds, she had called her mother who left work immediately, asking her co-workers to contact the police, which they did.
My sister-in-law arrived within minutes after I did and so did the officers.  I was impressed with the way my sister-in-law handled things.  She had been reading a book about a family going through tremendous suffering - living with a quadriplegic child - and yet, finding God's grace was sufficient.   She said that on the way home, she kept thinking that if God could get that family through their  crisis with their child, He could  get them through this situation which was mild in comparison.
I was also impressed with the police. They were courteous, efficient but also used some humor (appropriately) to lessen the tension of the situation.  Before much time had elapsed, we were all fascinated with the finger print process and at the same time laughing at some of the more ridiculous situations they had encountered in the past.  (Like calls insisting that someone had wiped out their entire living room, taking every stick of furniture,  to which the officers automatically want to reply, "Really???  So...where are you renting your furniture from and how many payments have you missed?")
In the end, the burglars didn't take much of value in the physical sense.
But they did rob a young girl of some of her innocence.
And that is what I don't like at all.
As I was re-reading Kisses From Katie, I saw where she wrote about the dichotomy of adopting children. ON the one hand, she loves having her Ugandan daughters and being able to mother them. On the other hand, she grieves for them and what they had to go through in order to get to  the point of being adopted.  Yet, she takes all that a step further - she writes that she fully trusts the experiences her girls went through were part of God's plan for their lives and that He will bring good out of all of it.
And that is where I am, still, several days after holding my niece in my arms while she cried over the reality of a broken, sin-cursed world.  I grieve for what she had to go through in those few minutes when she discovered the violation of her home.  But I trust that this is part of God's permissive will, part of His plan for her and that He will bring good out of it.
And in a way He already has.
An uncle coming straight from work to stand for over 40 minutes in the pouring rain to cover the broken window, a mother who was calm, comforting,  and who  modeled a logical, yet faith-filled approach to the situation.  And now, within days, she is seeing others come forward to replace some of the things that were taken.  And each time that happens, she sees the hand of God and how He can provide in miraculous ways.. through ordinary people.
In this world, thieves do break in and steal.
But in God's kingdom, which is the realm in which His children move and have their spiritual being  - a sort of dual existence in that our feet are planted on terra firma but our hearts are often unfettered- the good far out weighs the bad - and brokenness just allows His light to shine a little brighter into our hearts. 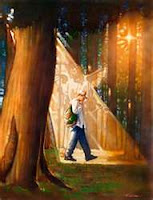 I love this painting by Ron Dicianni and I think the title pretty much says it all: Never Alone...
So thankful this is true...
Posted by Unknown at 9:37 PM