Life can seem  - and be -so complicated that at times, even as a retiree, I wish I could "streamline" things a bit more.  At the advanced age of 57, I've decided that if you want a life where all "your ducks are in a row", you need to A) never have a job  B) never get married   C) never have kids  D) never own a home  E) never remodel said home  F) never align yourself in any way, shape, form or fashion with utilities and/or tax people. Oh, and don't buy a car... Or groceries even for that matter...
Basically life is messy, ducks waddle all over the place, and frogs don't have wings...
Yet, the heart - or at least my heart - often longs for simplicity, for everything to be "right", all deadlines met, nothing hanging over my head or nagging at my subconscious, everybody happy, everybody well, etc.  But that isn't the way it is here.  Two days ago I went to the grocery store and on the soup aisle no less, this total stranger, a well-dressed woman who looked to be about my age, went off on a tirade about how the soup cans were smaller but the price had increased.  From there she leap-frogged  to the proposed pipeline from Canada and assured me, with a few expletives thrown in here and there, that more people died from the Alaskan pipeline than we'll ever know because the authorities are keeping it all a big secret. 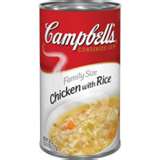 Ummm.... I just went in there for some cans of soup...
And being a people-person, I hated to leave the poor woman ranting and raving at thin air so I stood there, tomato soup can in one hand and chicken with rice in the other and tried to commiserate with her even though I don't believe in national conspiracies that are first brought to light in the canned-goods aisle of Edwards Food Giant...  As she went on about how wealthy politicians are stiffing the ordinary people and how Obama will sort it all out if he gets re-elected, I'm trying to look sympathetic on the outside but on the inside I'm thinking, "Get a grip, lady!  Europe has been going belly-up financially these past few months, Syria is about to go into civil war, Iran is trying to get nukes and threatening to shut off the strait of Hormuz, Haiti is still trying to recover from a devastating earthquake that happened two years ago and you think  A) we've got it bad here???  And B) one man,  be he democrat or republican, is going to straighten all this out??
Finally, I said something that I hoped was friendly, grabbed my grocery cart and fled, looking over my shoulder after I got in the check-out line to make sure she wasn't behind me.
Life is complicated.
Today on the way home from running errands, I put in a CD by Rich Mullins and found myself smiling, even laughing as one of his songs cut through the complexity of life and "put the world right" again for me.  In fact, several of the songs gave me much needed perspective but I wanted to share one in particular from the album, called "Songs".  Sometimes when I think everything is said and done, it all boils down to this:
There's been sorrow and trouble
In the world ever since
But there's hope for us still
In the Word God says
If we just be smart enough to just say yes
Smart enough to say yes to Him.