Looking up or... Grasshopper Theology:)

Okay.  Lately I've been losing things. That's not unusual. Over the years, I've lost my mind, keys, grocery lists, glasses, sense of humor, my current book I'm reading, the dog, and once, even the car - I knew it was somewhere on the Wal Mart parking lot but could NOT find it and finally had to call Phil to come pick me up and drive me around until one of us spotted it...  But there are some things (a few) that I just don't lose. And one of those things is official papers. I even have birth certificates, marriage licenses, etc for my great aunt, my parents,  and  Phil's parents.

But yesterday I could not find my birth certificate.  I tore the house up trying to find this vital piece of paper, went through the lock box and both filing cabinets twice and then, just for good measure, went through them all a third time - this time making sure I held every single piece of paper in my hand.  Last night, Phil helped me hunt again and this time I pulled out all my notebooks, loose papers left over from school, etc. and then we gave up. Only about 11 p.m., Phil said something that made me think I could find the certificate so I went on a new hunt and when I finally gave it up at 2 in the morning, the house looked like it had been ransacked by a burglar - not that we have anything worth stealing but still...  You couldn't even walk in the spare room.

So then I went to bed and lay there, my mind spinning as I thought,  Okay. Great. No birth certificate.  I can't even prove I was born.  No telling what else I've lost.  What if someone else has gotten my birth certificate and at this very minute, they are stealing my identity.... Well, if they are - good luck with that one!   And now the house is  a wreck! I've dragged out all these files, scattered books, moved small furniture around  and now I'll have to go through and  sort all that stuff out, toss some of it.  Actually toss a lot of it.... No, really, I should just tip the whole bloomin' house on it's side and just let everything fall out and then start over again...


When I woke up a few minutes before nine this morning, I hauled out of bed to get ready to go to the dentist, stepping over the flotsam and jetsam on the floor  - stuff that used to be in a plastic storage container under the bed before I went wild last night and started pulling everything out.  My mind barely noticed the clutter as I began framing excuses for the dentist - I meant to floss after every meal, really I did.  I know it's probably going to be worse than usual when you clean my teeth this time and I'm ready for the lecture.  I know I deserve it.  I'll do better next time, promise!  I'll even put floss in every room....   (and why not? We can string the floss from one wall to another and in that way, find our way through the  jungle that currently passes for our home).

After I got dressed, I had just a few minutes before I had to get in the car so I thought I would pull out my Bible and read it but, of course,  I couldn't find it!!!   However, there was an oversized book near my chair,  a book I bought for PHil at  Christmas called The Work of His Hands, written   by the astronaut, Jeffrey Williams.  It's a coffee table book full of pictures from the International Space Station with fascinating commentary about what it's like to live on the ISS.  I hadn't looked at it since Christmas break and so now I opened it up at random  and found myself staring at some breathtaking pictures of the glaciers, clouds, and snow. One picture in particular (p. 66) caught my attention and held it. You could see a couple of mountain ridges in the Himalayas which had a covering of snow along the very edge. And although the sky was blue, you could see white, wispy clouds merging with the mountain tops.  It was spectacular.

I finally tore myself away from that pic and the next one that caught my eye was of a military station out  in the middle of the Sahara Desert.  Quite a contrast but no less impressive to see hundreds of miles of sand with a few brown lines streaking away from the station, going in various directions to what appeared to be.. .nothing.

There are a lot of things that I fear... the dentist (nice guy that he is) being a case in point.  But I also fear growing older except that.. .the alternative is also something that I fear and I fear it more than I do growing older....if that last sentence made any sense...  I'd like to believe that God is always going to do things the way I want but I know from experience that He doesn't always do what I prefer.  Sometimes He lets me and my loved ones go through really rough times.  And I fear that.

But as I looked at the desert scene and then looked again at the mountains reaching up into the sky, I thought, "He made all this.  The Bible says that all of this  is the work of His hands.   And if He is big enough and smart enough to fashion entire mountain ranges in one area and then create an ocean of sand in another then He's big enough that I can trust Him." 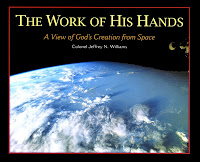 Surely from the beginning someone told you.
Surely you understand how the earth was created.
God sits on his throne above the circle of the earth,
and compared to Him, people are like grasshoppers.
He stretches out the skies like a piece of cloth
and spreads them out like a tent to sit under...
Look up to the skies.
Who created all these stars?
He leads out the army of heaven one by one
And calls all the stars by name.
Because He is strong and powerful,
Not one of them is missing...
Surely you know, surely you have heard
The Lord is the God who lives forever,
Who created all the world.
He does not become tired or need to rest..
He gives strength to those who are tired
And more power to those who are weak."
Isaiah 40:21 - 29
Posted by Unknown at 9:30 PM