Tonight on Amazon (yes, a place I need to avoid like the proverbial plague) I typed in a Corrie ten Boom book that I mentioned in an earlier blog.  The book is called, Jesus is Victor and it helped sustain my mom during 10 years of heart trouble.  Unfortunately,   it  has been out of print for years which to me is sad because it deals with three topics in a simple but profound way, mostly through apropos stories from Corrie's own life. The topics are: anxiety, sickness, and terminal illness.
There are two things that stand out in my mind whenever I think of this book.  Shortly after Phil and I got married, his father came to stay with us for a weekend.  Mr. Abernathy had significant brain damage because of alcoholism and so he could not live by himself.  Phil's older sister was taking care of the dad at that time but whenever they went out of town, he would stay with us or with Phil's other sister.
Dealing with my father-in-law was quite different. If you've ever had someone in your home whose short-term memory can suddenly leap-frog into the past in a second of time, you know what I'm talking about.  He could start a sentence talking about his wife and then, before he finished the sentence, he would be talking to me as if I were his wife.  Conversations were interesting to say the least. He still had a great sense of humor at times but his language was salty and so we never knew exactly what would come out of his mouth.  We often found ourselves laughing while, at the same time, looking over our shoulders to see if others heard what he just said - that type of thing.
And since we didn't really know how much he could remember and how much was posturing, our interactions with him were often frustrating for us as well as for  him.  For example, if he got mad at us, he would invariably hide his false teeth and since we ate out a lot, it would be a stresser to remind him several  times before leaving the house to put  his teeth in -  only to have him open his mouth wide at the restaurant to show us he had no teeth... again... (On those occasions, he would never open his mouth before we left but would just nod and mumble that his teeth were in and he was ready to go.)
But then there were other things that he did which plainly indicated to us that he really couldn't figure things out. For example, he had been an architectural engineer but one day while staying at our house, the window unit AC turned his room frigid.  When Phil got home, his dad had unplugged the AC from the wall - clearly, he could no longer figure out how to turn the knobs on the window unit so he finally managed to pull the plug from the socket. And, of course, those were the sad times when we realized that this once brilliant man who designed entire buildings could no longer even turn a simple knob on a window unit. This, frankly, is the  reason that we don't have alcohol in our home. (This plus the fact that Phil's brother  died of cirrhosis of the liver when he was 29.  We don't have a problem with other people drinking in moderation, it's just not for us.)
One Saturday in particular, things had been tense - lots of mishaps, frustration building, etc. We decided to go out to eat in the evening and of course, after we got seated at Wendy's, Mr. Abernathy bared his gums for us in a broad smile as if to say, "Look!  No teeth!"  and  for Phil it was sort of the final straw. He bit his lip and looked away from his dad to hide his frustration.
As a new bride and as a person who hates tension, I sat quietly  hoping things would get better. But his dad was really on a roll  that night and to this day, I'm glad Phil was  looking away from his dad when the next event happened.  For some reason his dad chose at that moment to take a little paper cup with  ketchup in it and tip it up as if it were the elixir of life. I watched with big eyes as he held the cup over his head, tilted his chin up and opened his mouth wide to catch the red stuff,  slurping it happily  and then smacking  his lips, all things that Phil hates. (The smacking and slurping. Don't think drinking ketchup was anywhere on his radar screen  at that time...). 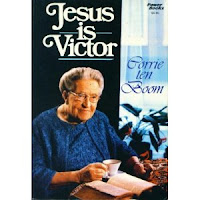 So the next thing that went through my mind was: Okay. This is not good.... Wonder what he's going to do next?    As my anxiety ratcheted up a notch, I did what I usually do when I'm tense, I started reading....    I had Corrie's book, Jesus is Victor, with me that night so I opened it up and started reading in the section about anxiety, appropriately enough:)
To this day I remember reading a story about  how she had to travel on icy roads to get from one conference to another. It was late at night when her driver showed up and as she put it, after they got on the dark, slick roads, she could tell that he had been drinking and that he had enjoyed not a little...:)  As they skidded from one side to the other in the dark night, she realized that she would not be fit to speak at the next conference if she spent the entire drive in white-knuckled anxiety.  So she prayed about it and then told the driver that she was going to let him drive while she slept. And she went to sleep!  She arrived safely and was able to speak the next morning at her conference!
Her story really had nothing to do with my situation -yet after I read it,  I didn't feel anxious anymore. The situation had not changed but my perspective had. Somehow we got through the meal without saying the things that were probably on all of our minds and much later, when I told Phil about the ketchup thing, we were both able to laugh about it.
The other thing that comes to mind when I think of this book, is the time when we heard that one of Phil's relatives had been diagnosed with stage 4 cancer. We weren't sure where this relative stood spiritually and I immediately thought of Corrie's book, Jesus is Victor.  The only copy I had was in a hard-bound anthology, which would be really tough for someone who was ill to even hold, much less read.  It had been years since I'd been able to find a paperback copy and by that time, even the anthology was way out of print.
So I remember taking my hardbound copy and tearing up the spine so that the Jesus is Victor book was separated from the other two books in that edition.   AFter I pulled it out, intact but coverless of course, I mailed it to this relative. I never knew if it helped or not but I do know it was the first thing I thought about sending in a time of crisis like that. In fact it was the only thing I thought about sending as I knew the person already had a Bible.
Then, for many years, I just didn't have a copy of the book  anymore. Couldn't find it anywhere.
So I'm not kidding when I say that tonight, after looking for this book on Amazon (duhhhhh), I was thrilled to find quite a few paperback copies as well as some copies of the hardback anthology. I ordered two of the paperbacks and one of the anthology.  I wish I'd thought to do this sooner - to me, it's just a little book that I'd like to always have on hand for myself but also for  others. Whatever you are facing, daily anxiety or imminent transition to eternity, it's just very comforting.