When our son was in preschool, he had problems with another child.  One day after school, as I was driving David home, he told me that he had reported this child to the teacher on the playground for something the kid said.
I asked him what the teacher said and he replied earnestly, "She said that we all love each other at school."  Then he added in all seriousness, "But I don't think that's happened yet..."
Indeed...
Bullies have always been around.  You can find them in the Bible and in all the ensuing writings that span the centuries since  Goliath and Samson first made the Gideons of the world cringe.
And every family has their stories of how someone in the family dealt with the neighborhood (or school) bully.  My adopted "father," Cecil, was born in 1918 and grew up on a farm in Hazen, Arkansas.  When he was in the first grade, three  older school boys grabbed  him after school and rolled him around in the grass until his clothes were stained.  By the time he got home, he was late for chores and headed for a "whipping" for making more work for his mamma. 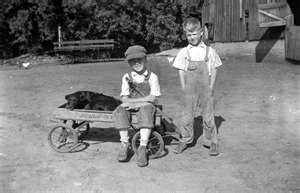 After several recurrences of this - getting rolled in the grass, coming home dirty and late, and getting corporal punishment, he finally told his dad what was happening.  His father told him that the next time those boys grabbed him, to "shinny up one like he was a tree" and "grab hold" of the big kid's ear with his teeth and hold on for dear life.   Cecil did that and after the big kid got through hopping around and yelling and finally managed to get Cecil detached from his ear, he said that those boys became his best friends.
One other story that Cecil recounted concerned two teen-age boys who had been threatening each other until it had reached the point where they  had a court date to deal with the issue. Unfortunately, the visiting judge was late on the day court would be held so after the families gathered for basically nothing, the sheriff decided to take care of things.  He  drew a big circle in the dirt and then  told the boys to get inside  the circle and "go at it".  The boys fought it out and when they were finished, the sheriff asked them if they were satisfied. They said they were and left friends again.
Whether those were sound psychological ways to deal with bullies, I don't know.  All I know is that they worked.
Today there is a huge cry about making schools a "culture of love" where bullying is a thing of the past.  It sounds good.  But the bottom line is that bullies exist everywhere - in the office, in the family, in the neighborhood, in college offices, in the supermarket.  I've even encountered them at yard sales, of all places.  And honestly, even in churches, although not many in that setting thankfully.
What I'm saying is that while it sounds nice to talk about eradicating bullying from schools and teaching everyone to love, it's not going to happen.  As long as bullies exist, bullying will exist.   Most people can be taught to love others (or at least pretend to accept others). Some, however,  cannot.
And I guess what I'm really saying is that the tragedy that happened at Chardon High in Ohio yesterday is not the fault of the school and definitely not the fault of the victims. It's not even clear that bullying was involved in the shooting that occurred early Monday morning. But what if that was the reason?
Bottom line:   bullying is never a justification for cold-blooded murder.
Tonight, there are three families who are still coming to grips with the fact that they sent their sons to school for a normal day and now... they will never see those kids again here on earth.
My sympathy is with those families. Completely.
Yet, as I read comments posted by other members of our society, I see sympathy for the shooter and a desire to place blame on the schools for not teaching kids to "love" each other.
I don't know why the shooter was enrolled in an  alternative school. But I know you don't get sent to alternative schools for being good.   And I don't know why he walked into the cafeteria yesterday and gunned down 5 teenagers who were just eating breakfast and minding their own business.
But I know this: there is no justification for what he did.
And the blame is his.
Praying for Chardon High and for the families of the five victims. 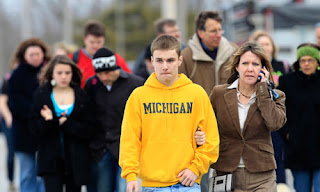