Of birds and donkeys....

A couple of nights ago, this verse caught my attention: Psalms 32:8 (Complete Jewish Bible).  It goes like this, "I will instruct and teach you in this way that you are to go; I will give you counsel; my eyes will be watching you."
As I read this, I thought, "Who wouldn't want instruction from God Himself?"
Then I thought about the last part, "My eyes will be watching you..."  In our society, those words can be kind of creepy.  But I don't think the Psalmist meant it that way.  Instead, I think he meant God would watch over us the way a parent does when he sends a child on an errand.  It seems to fit the context here:  I will instruct you and teach you... My eyes will be watching you...
I thought about when David was younger and I might send him across the street to take something to the neighbor's house.  Because he was small, I would stand in the door way and my eyes would be watching him the whole time, making sure that he crossed the street safely, ready to run to his defense should the neighbor's dog scare him, etc.
But then another example came to mind, a more serious one.

I was nervous talking to the dad that night, but nothing like I would have been if I hadn't known that Phil's eyes were on me the whole time.
Sometimes God sends us along paths that are complicated and maybe scary to us. The Psalmist goes on to say  that we shouldn't act like a mule who has to have a bit and bridle to make it obey.  Mules balk because they are scared or because they think they have a better plan than their owners. Sometimes I do the same:) 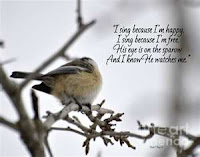 Still,  God is our father and He  knows we feel uneasy or even at times  want to  "put our ears back" and say "No way am I gonna do that! You've got to be kidding!!".  That's why He gives us instruction and promises to keep on counseling us as we go forward. And then, on top of that, He assures us  that His eyes will never leave us the whole time we are talking  to that unknown neighbor or walking  into that hospital room with a bouquet of flowers held in clammy hands, not sure what we will see, or standing up in a civic group to voice an unpopular opinion.  We are His hands and feet and the truth is: He has a deep love for even "the least of these"; yes, even  for a dad who has a drinking problem and  a young son who loves him.
Posted by Unknown at 2:38 PM