I've had a super-easy day. So far I've not had to cook:)  Instead, I could just reach into the refrigerator and get food already prepared.  My electricity  blinked out a few times earlier in the week due to a weird wind and rain storm that came up suddenly but the outage was so instantaneous that the only hardship it caused was to make us reboot the computer :)
We are often stunned now when we fill up the car but still, we can afford it and I've been able to take my niece to school this week every day, go to West Little Rock to shop several times and go to my old stomping grounds of Benton.  So although it seems to take a lot more to fill the tank these days, it hasn't slowed me down much if any.
I've been cleaning out our spare room (sort of... sigh...)  and so far I have a couple of boxes of old clothes to give away.  Honestly, culling out those few items didn't make much of a dent in what we had...  Basically, we are blessed.
But that's not what this blog is about.  It's about some women in Uganda (no, I won't mention the book Kisses from Katie again.. promise ;)  - a group of women from a slum village who also happen to be refugees from Northern Uganda/Southern Sudan. They are despised by the other tribes and villages around them.  However, Amazima Ministries has started an industry - a women's beading group - and the ministry buys these necklaces and then sells them.
This is huge.  In a village where most don't have enough food or a bed to sleep on, let alone extra clothes or electricity, most of the women make their living by prostitution, by scavenging among the garbage for scrap metal, or by making home brew to sell. Katie said that one mother would take the home brewed mash that she could not sell and give it to her children, making them drunk so that they would forget their hunger.
That's mind-boggling to me.
At any rate, Katie has formed a beading group and in order to participate, each woman has to agree to give up the three traditional ways of sustaining life in this village.  The women take recycled paper and fold it into traditional African beads. Then these "beads" are coated to stiffen them and make them shine.  The native beads are interspersed with glass beads. 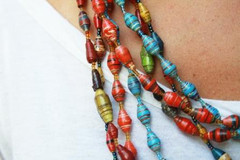 It takes quite a while for the women to make them and each Friday, they have a Bible study time and then Katie pays the women for their necklaces. And then she takes the women  to the bank where they put half their money  in savings and they keep half to live on for the rest of the week.
The necklaces are then sold here in the states, shipping from Tennessee.
They cost 19.95 plus shipping.
Today, even though our time zones are different, I'm thinking about these precious women who spent their Friday beading, praying, studying the Word and laughing a lot, I'm sure.  Or maybe singing a lot. Or maybe both.  Because God has given them hope and with hope, comes laughter and singing, don't you think?
Just knowing what God is doing in the lives of my sisters in Christ way across the ocean - just thinking about that  has blessed me today.  And so now I need to bless them, I think.
How about you?