And that's when it hit me:   I am the spiritual special needs child who can't do anything for herself and God is the one who has brought me into His home and seated me at His table; I'm the one who has been mended, I'm the one who has been filled.  And yes,  I am the one who has been "welcomed with open arms."
More than that, I am the one who is learning from some of the neediest children in the world - children who truly know brokenness and who, because of that, as they come under the protection of Amazima Ministries, also know, fully know, the power and love of God.
WE have a saying in the States, "If it isn't broken, don't fix it."
I think God was saying to me this morning, "If you don't understand, really know,  that you were once broken, you'll never really know or  understand the love I lavished on you in order to raise you up and seat you at my table." 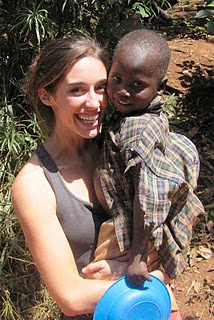 One of the kids that Katie cared for over a period of time, a little boy who was starving, abused, and clearly dying of malnutrition and who is now healthy and actually loved by his family - this little boy runs after Katie's van whenever he sees it yelling something like, "Auntie Katie!  I love you! I am fine!  I am well!!  I love you!!!"
Today I left church in tears, knowing that I should be running  after the hem of God's garment  every single God-given day, crying out, "Abba! I love you!  I am well!  I am fine!!!  I  love you!!!"
As Katie puts it in her book: God loves us...
We
love
Him
Back...