Someone worth listening to....

To be a blogger, you have to probably be a little strange:)  My only comfort is that if this hobby of mine means I'm a bit weird, I am in good company!  There must be 40 billion bloggers out there and that being the case, I'm truly grateful if anyone reads mine.
I realize that to ask anyone to read what I write is asking a lot in this day and time because A) I'm not succinct like other bloggers and B) everyone is so busy.  So one of my goals for 2012 is to respect the limitations of my own abilities and the time constraints of others.  Translate that to: I nearly killed myself trying to blog every day in Nov. and Dec. and it ain't going to happen agin... :)
The only reason I'm writing so soon  again is to put the word out that there is a testimony on You tube worth hearing, or maybe I should say, there is a lady out there who is definitely worth knowing - someone I wish I could meet personally, someone I wish I could introduce to every loved one and friend I have. 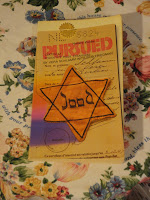 Her name is Vera Schlamm and she's with the Lord now, has been since 2008.  She grew up under the Nazis and she was Jewish so that probably says a lot about her formative years.  Her education ended about the ninth grade thanks to anti-Semitism  and her family eventually escaped to Holland. But, like Anne Frank, they still ended up in a concentration camp.  Miraculously they all survived Bergen Belsen, became part of a prisoner exchange, and then got  shuffled from Switzerland to Africa and back to Holland before the war truly ended for them. Eventually, they  made it to the States. When they arrived, although Vera had had no high school and it had been years since she'd been in a classroom, she read and understood 5 languages (some of which were self-taught) and she was accepted into a college.  From there, her professors suggested she go to med school, which she did.  And eventually she became a successful pediatrician in Glendale, California.

Her testimony tells not only the main points of her life story but also delineates her search for truth and peace.  If you listen to her story, you will find that she is soft-spoken with a trace of an accent and more than a trace of serenity, even though she lived with health problems throughout her life due to various times of near-starvation when she was young. (For one thing, her growth was severely stunted; I  think she was only about 4 feet 9 inches tall.  For another, she had chronic edema throughout her adult life.).   A week or so ago, I found that her autobiography, Pursued, could be ordered through Amazon.  I was thrilled when I got it, not only because I could re-read her story (the first time I got it was through the inter-library loan system and they had to go out of state to find one copy) but because it was signed by her. Underneath her signature, she wrote, Isaiah 12:2. 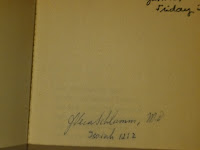 It takes 45 minutes to listen to her story which I know is a lot to work into overcrowded schedules.  And maybe you have to listen a little closer because of her accent although Phil and I had no trouble understanding her.  But I don't think you could find a better person to spend some time with on a long winter evening.  So if you would consider listening to the link below or bookmarking it for another day, I can't imagine that you would regret it.  Certainly, it won't be a waste of your time.  Hopefully, it will touch your heart the way it did ours.