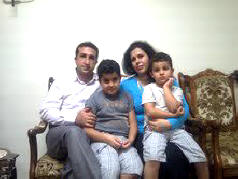 Each month I pray that God will add at least a  1,000 Iranian people to His kingdom. This idea didn't originate with me.  If you have found peace in Christ, would you join  in praying this prayer for Iran?  And would you especially say a prayer for Pastor Youcef and his family today, as well as for all the other Iranians who are in prison right now for religious or political reasons?
I'm sure God will bless you if you do.
Posted by Unknown at 7:36 AM