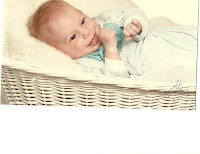 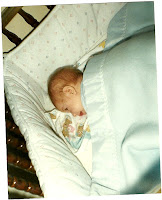 Twenty-one years ago today, our son was born.   We thought we knew a lot about parenting. We quickly learned that we knew nothing. He had food allergies and at times we couldn't decide if we should submit his picture to the Gerber baby contest or as a poster child for colic.  At one point, as a precaution, he was on a heart monitor. When the technician brought it out and showed us how to use it, he lamented the fact that one couple had poured coke into one of their expensive  machines and ruined it.  AFter several false alarms in the middle of the night, I understood why...
Honestly, I don't even remember Fall that year.  I remember having David on Sept. 8th, after eating (yes, I will admit it) a tuna sandwich and a chocolate bar for breakfast.  (For expectant mothers about to deliver, in case you are wondering - this isn't a good idea.)  The next thing I remember is calling a friend about 5 days later and crying hysterically.  Thankfully, she and her mother-in-law came over with food and words of advice.  Basically, I thought I had experienced stress and sleep deprivation in college... but as a new mom,  I quickly realized that in these things,  I was but  a piker...
I also remember going to a pediatrician (after another sleepless night) and blurting out, "Some people have more than one of these on purpose... and I don't know why!!!"  (I never felt like I was a favorite with the doctor after that initial visit.  Could have been my imagination but...)
Basically, Sept. to Dec. of that year was a blur.  And in fact, my only memory of Christmas that year was standing by the tree and  ringing a little bell on it because it was enough to momentarily distract him from crying. Needless to say, I rang that bell a lot, with David nestled in the crook of my arm or draped over my shoulder.
When we reached the sixth month anniversary of his birth - we hit a milestone. He slept all night and I don't know if the angels rejoiced over that but we sure did!!!
Yet in all those sleepless, anxious, debt-ridden days, I don't think that we ever doubted David was God's gift to us.  (Sometimes we wondered if He had made a mistake and delivered the gift to the wrong house since we were so clueless as parents...)  No matter how many times we looked at each other at 11 p.m. and tried to stare the other one down  as to who would get up this time  and tiptoe into the nursery to stealthily wind up the Winnie-the-Pooh mobile - an art in and of itself - we would still find ourselves stopping to  marvel at his soft cheeks, his tiny feet, his sweet  smile. Even after the first hectic weeks had retreated into memory and he was a toddler, we'd still sneak into his room at night to watch him sleep - he always looked so angelic!
And then there were the days when he would want to go jogging around the block with me and we'd have discussions about, "You can't keep up with mommy!  Stay here with Daddy and then I'll take you for a walk later on!"  But inevitably, I'd take him and then.. I'd end up carrying him most of the way.
Times have changed. Just yesterday, I wanted to carry some books to my sister-in-law's house.  They were pretty heavy so I asked David if he would walk with me and carry them.  He did and half-way through the journey, it dawned on me that he was striding along effortlessly while I was struggling to keep up with him!
A lot has changed since Sept. 8, 1990!  I know David has grown up and is now a young man. But truthfully, as I look back over those first months and years, I think Phil would agree that we did more "growing up" than David  did!  For the first time, we had someone whose needs absolutely had to come before our own and that was good for us.
Bottom line: I think he taught us a lot more than we ever taught him!
Sept. is a great month and 21 years ago, we got a great gift in our son, David.