I try not to write unless I feel like I have something worth saying. But there are exceptions to that rule and this may well be one of them.
Just now as I was headed to Chick-Fil-A to pick up lunch for us, I suddenly had a flashback to my high school days.  As I've indicated in another blog, money was tight when I was young but we lived pretty well because of my mom's ability to manage money.
Still, I never ate steak as far as I know - and certainly never had one in a restaurant until I was in college. I remember going out on a date and being totally confused when asked how I wanted my steak cooked - I didn't know!  So I just parroted the order that my date had given, down to the way I wanted my meat cooked and the dressing I wanted on my tossed salad!
At home, we basically had the same things each week - chili one day, hamburgers another, Spanish Rice another and so on.  And on Spanish Rice days, since the bus dropped me off about an hour before my mom got home from work, it was my job to get that on the stove and have it ready before she got home. So another memory I have is of daydreaming about  a boy - what else back then? :) And consequently forgetting to put the meat in with the rice and the tomatoes and spices.  To this day, I have no idea how I could have forgotten the main ingredient but I did and I assure you that I  still remember the chewing out  I got when my mom got home!  (Let me say that I never made that mistake again!)
But I've said all that to say this.  Picking up food at places like McDonald's, Burger King, and Chick-fil-a is no big deal to me now and hasn't been for years.  Since I've worked all my adult life, running through the drive-thru was just a way of life - nothing special.
But when I was in elementary and high school, it was a huge deal.  Even when my parents were still  married, we hardly ever did it.  So much so, that I can remember telling my elementary-age friends on the bus that Burger Broil was a lot better than a new-fangled restaurant with a Scottish name called McDonald's because burgers at McDonald's cost 25 cents a piece while the ones at Burger Broil were 19 cents a piece. (And I probably rounded up those conversations by proudly announcing that our family never went to McDonald's, emphasizing the fact that we weren't frivolous!!!  Some things do come back to haunt you...)
I can also remember kneeling on the couch in our living room so that I could lean over the back of it and watch through the picture window for dad's car on the rare occasions when we did bring home those awesome 19 cent burgers!!!
But my main memory is of my high school days, those very tight times when it was just mom and myself living in a mobile home, her working as a social worker and me taking every baby-sitting job I could find to buy extras for myself  such as make-up, stylish clothes, my Senior pictures, etc... the Spanish Rice days :).     During those times, once a week on Thursdays, my mom would run by a restaurant called Black Angus because they ran a special on those days - buy one burger, get another one for 1 cent.  For over a year, she would  pick up two number 1's for me (mustard, pickle, and onion) and two burgers for herself (either barbecue or salad burgers) each and every  Thursday.  To this day I can still remember how those 1.01 burgers tasted and how I looked forward to that every week.  When medical bills began to pile up and they changed the special to buy one, get another one for 25 cents, we had to drop that from our weekly budget and it was no small thing to me at the time.
I guess I'm just saying, some things really are more valued when they are harder to come by.  Maybe all things are that way.  Now, 40 years later, it's so much easier to get fast food that my main concern at this stage in  life is which one? Which place do I choose?  And often, after I've made my purchase, I feel slightly disappointed because I'm thinking of all the other types of food that I could have had, like I could have  gotten that pizza that I see highlighted in living color on some sign as I'm driving back home with a sack of burgers... Or, there's a Mexican Restaurant right across from the burger place - tacos  would have been good too!
But really, none of the meals I buy now will ever stand out in my memory as much as those two burgers once a week from Black Angus - not only because they were good, but because they were special.  WE sort of live (or at least I do) in a fast food, throw away, pleasure seeking, have-it-your-way because you-deserve-a-break-today world and yes, life is a lot, lot easier now  than it ever was when I was young - when it comes to cooking/serving meals at least...  But I'm not sure it's better.
Maybe, after everything is said and done,  it's not a bad thing that our grandparents (or great-grandparents or whatever) had to walk uphill both ways for miles  to get to school :) 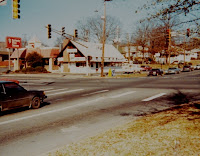