The Best Christmas Ever...

Wow.
Christmas is different this year, for sure.
My husband came home from work early Tuesday and slept off and on for 24 hours. Thursday he went to the doctor and was diagnosed with type A flu. He hasn't had the flu in decades. Literally. But this time he made up for it. In spades.
Last night his meds didn't agree with him and between 3 and 5  this morning, he had three severe bouts of nausea.  Each time he showed signs of going into shock - which is normal for him when badly nauseated.  So we spent those two hours talking about the Lord (Phil's desire) in between bouts of literally calling on the Lord to help him when the nausea hit.  While Phil was trying to recall words to the hymn, "All the Way My Savior Leads Me", I was trying to figure out when and if I should get help to get him to the ER.  Thankfully we never had to do that.
This morning I went to the walk-in clinic wearing a hospital mask in case I had the flu as well.  Fortunately, I just had a sinus infection and they put me on Tamaflu to hopefully prevent me from getting what Phil has.
Choices.
To be bummed out or not to be bummed out. To be thankful... but not completely... To grouse with a just a touch of grace?
Last night I knew our family Christmases would be postponed. That isn't a problem: we know the flu is a nasty gift that keeps on giving. Plus, we are both so tired right now, we just want to "pull up the drawbridges" and rest.
Still, it's not what we had in mind for Christmas 2013.
Friends.  They impact my life daily. 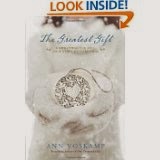 A week or so ago, I was in a Lifeway Book store looking for something to read.  I almost always have at least one good book that I'm reading but for several weeks, no matter what I picked up, nothing held my attention for long. I felt restless.   In the store, I ran into a friend from a few years back, we exchanged greetings, and then she showed me the book she was getting:  The Greatest Gift by Ann Voskamp.  I'm not a big fan of devotional books but  nothing else appealed to me so I halfheartedly bought a copy, thinking I could give it as a gift if  I didn't like it. (And, yes, I do that.  I don't sign my name into an "iffey" new book until I've read the first chapter and decided it's a keeper!)   I got Ann's book on Dec. 6 so I was behind already on the advent devotionals before I ever got it home.
For centuries, the Jewish people have said, "Next year in Jerusalem!"
Well, for decades, I've been saying, "Next year a truly Christ-centered Christmas!"
As soon as I started catching up on Ann's advent devotionals, I knew I had found a book that was truly all about how to have a Christ-centered Christmas.  I have since read that she has an upside down Christmas tree hanging from her ceiling this year to remind her kids (all six of them) that they want an upside down Christmas!  (You may not think that's cool, but I do!!!  And, yes, next year an upside down Abernathy Christmas tree in the living room!!!)  I have also read that in the past 10 years, none of the members of her family have given Christmas gifts to each other. Instead they take their Christmas money and give to other ministries.  (She doesn't urge others to do this - she says that each family has to find their own way of celebrating Christmas and that there is no magic formula.) 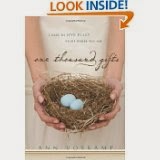 Reading her book led me to re-read her first book - also brought to my attention a couple of years ago by a dear and faithful  friend  - One Thousand Gifts.  I started re-reading it slowly - I can do that since I don't have a riveting biography or novel clamoring for my attention!  And night after night, morning after morning, as well as throughout the day, both books have spoken to me about how to live in the here and now, how to sense the presence of God in the midst of the "mess" as she would say, how to find eucharisteo (things to be thankful for) even in the hard things.
So... back to where this entry began... Last night the thought went through my mind: this won't be much of a Christmas. And then, right behind it, came the sequel: actually, this may be the truest Christmas we've ever had.  The Christmas I've always wanted.
I thought about it.  Phil's family and my family had already decided to keep the gift giving simple and within reason. But I still had a couple of last minute gifts to get. My plan was to have them safely tucked away in the spare room before today.  However, I dreaded the last minute shopping.  The flu hit and, voila! - suddenly I was restricted to pharmacy trips only.  Pressure's off - I can finish my list the week after Christmas.
This morning - Dec. 20th! - I found myself wearing a hospital mask and heading to a clinic, the last place I wanted to be.  I got out of bed thinking this was going to be a total bummer. And then I remembered Ann's encouragement to look for eucharisteo even in the hard places, the places you don't want to be. And so I decided I could be thankful that I had an opportunity to break out my super-duper, 5.00 holiday necklace that lights up! I hadn't worn this treasure even once this season,  unbelievably enough!  (I'm being mostly serious here...) And what better place to wear it than to a clinic full of sick people 5 days before Christmas?
So I did and it was neat to see total strangers smile and say, "I love your necklace!"
Eucharisteo. Christmas in an un-Christmassy place.
Then I thought about friends - sweet families I know who are in the midst of very dark, very difficult circumstances. Sitting in a hospital while a loved one is passing from this world to the next. Or sitting in an ER waiting room, while the verdict is not yet in - will the loved one make it or not? Will there be residual damage?  And if so, how much?  And yet another situation where the family is, even now, getting ready for the funeral of a loved one...  And there are others.
And so I prayed for the ones who hover between life and Life - that God would be merciful and help them in whatever way is best. And I prayed for the families, that even in these pits of darkness, that they would somehow sense God's presence and even experience Eucharisteo because He is in the pit with them.
Eucharisteo.
Focusing on the gifts  we've already received from His hand. Being attuned to the daily gifts He gives us even now, no matter how they may be disguised.  Being aware of His presence.
Truly, for us, this may be the best Christmas ever.