I have been blessed to be able to attend Bible study this week - something I normally take for granted.   I'm not used to having to "parcel" out my limited energy and plan ahead for something as simple as a video lecture and small group discussion.  Clearly, I take a lot for granted.

The title of the Beth Moore study that I was fortunate enough to attend is  Mercy Triumphs Over Judgement and it comes directly from a verse in James 2, a verse I had somehow overlooked even though I have read James many times in the course of my life.
This week, I found a new novel by Randy Singer to my delight. He's a Christian lawyer and pastor and author - maybe an unlikely combination:-)  And his books have been compared to John Grisham's, with good reason.  He's won awards and I have yet to read any of his books where I didn't have to re-think some of my preconceived notions, of which I apparently have an abundance  :-(
This time around, however, his novel  made me extremely uncomfortable and several times I wanted to walk away from it. Yet because I was already hooked on the characters, I couldn't. I  finished it last night and then, totally stunned, spent another hour going back and re-reading key chapters.
In the middle of the novel, one character talks about how mercy triumphs over judgement. "For judgement will be merciless to one who has shown no mercy." It was a direct quote from James 2:13, from the Bible study I am working on.  And that did not strike me as a coincidence...
The book, The Last Plea Bargain, deals with multiple issues, including the sticky one of  inmates who are on death row and who also  have conversion experiences.  I thought Singer's handling of this subject and all the others he introduced in the novel were fairly and deftly handled.
But now, the novel has ended and I'm left with James 2:13:   "For judgement will be merciless to one who has shown no mercy.  Mercy triumphs over judgement.." 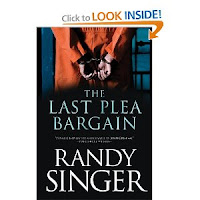 For me, this doesn't play out on as grand a scale as it does for Singer's characters in his latest novel.  Their choices, when faced with this verse, are gut-wrenching to say the least.  Mine are much less adrenalin-laced and for that, I'm thankful.
Basically, for me, this verse boils down to:  will I follow the Royal Law and love my neighbor as myself?  Or will I extend mercy to myself and exercise judgement when thinking of  and relating to others?
Definitely something  I will be thinking about (and hopefully acting on)  in the days ahead as I continue through the workbook on James.
So speak and so act, as those who are to be judged by the law of liberty.  James 2:12