One of the Very Worst Features of Modern Society... :) 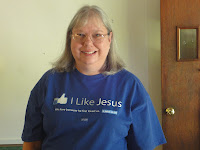 I am really enjoying The Number 1 Ladies' Detective Agency books; today I started the ninth  in the series, The Miracle at Speedy Motors.  The stories are set in Botswana and the main character, Precious Ramotswe, is an entrepreneur who sells her father's very valuable cattle shortly after his passing. And  then, to the shock of some,  uses this great  wealth to open up, not just the only ladies' detective agency but really, the only detective agency of any kind in the entire country of Botswana.
She's never been trained to be a detective but that doesn't bother her: she has a manual for detectives, which she refers to frequently, and she also has a secretary who received the unsurpassed mark of 97% from the Botswana Secretarial School.  (As opposed to the other female secretarial graduates who made marks in the mid 40's but who also wore very short skirts...:-)
One of the things I like about the character of Precious Ramotswe is that she is a "traditionally built" woman.  I can identify. (See pics above and below if you have any doubt as to what a woman with a traditional figure looks like :) Also, her secretary wears these unspeakable glasses (see pictures above and below... ha!)  And Mma Ramotswe has to bite her tongue to keep from telling her secretary that she should not be wearing spots (dots) on her scarves when her skin is also somewhat dotted... (Okay... you can quit looking at the pics now... =/ )
In the ninth book, Mma Ramotswe laments the fact that the values of the "old Africa" are giving way to newfangled, modern ideas. On page 10 the author writes,  "Mma Ramotswe ... considered it one of the very worst features of modern society that people should be ashamed to be of traditional build, cultivating instead a look that was bony and positively uncomfortable. Everybody knows, she thought, that we have a skeleton underneath our skin; there's no reason to show it."
I love that!
In fact, as I was reading this book today, I had to smile at several of the passages in it, including the one above.    And then I began to  wonder if there were any advantages for me in being a traditionally built lady, even though I am not living in Botswana...
And guess what?? I found one!  Seriously!!!
Since it's Spring and I love tee-shirts, I went out and bought three new ones at Mardel's this weekend.  However, I saw two others that I really, really wanted and yet, I wasn't sure I should buy them.  One was - how shall I say it -  a little ... colorful??  The other maybe  a little ... youngish?? For someone who is old enough to be a grandmother?? (Okay.. a lot youngish...) 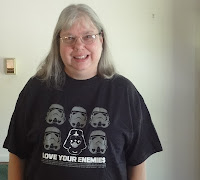 So I described one of them to Phil last night and asked him if it would bother him to sit next to a traditionally built wife wearing a shirt with Darth Vader and his storm troopers on the front of it.
His laughing reply interested me, "No, Cathy.  I've gotten used to the fact that my wife is a billboard for Christianity..."
A billboard for Christianity...
Now there's something that a traditionally built woman can do better than a modern one with short skirts  and low marks in   secretarial school...!
Again, I had to laugh!  But at the same time, it also started me thinking.
When did I begin collecting Christian tee-shirts.. and wearing them? I guess I've done it off and on for  years but I know that in 2006 it really became a sort of mission for me.   In that year, from January  to April, I had a friend in the hospital whom I visited frequently.  As it became clear she wouldn't leave the hospital, I started going 4 or 5 times a week, usually right after school.
I had one shirt in particular that I liked to wear at that time- it was black with white letters on the front that said, "In a dark world..."   And then on the back, there was a white cross with the words, "let the light shine."   Once when I was walking up to the hospital on a Sunday afternoon, I noticed a dignified, African American man coming along side of me.  He looked like he had just come from church  - I was wearing slacks and my favorite tee-shirt while he was wearing a very nice, conservative suit.  I'm sure I looked kind of sloppy while he looked distinguished.
But as he drew even with me, he smiled at me and said, "I like the message on your shirt."  I wasn't sure what to say but since most people headed to the hospital are dealing with serious life issues, I gathered my courage and said, "Sometimes, Jesus is our only hope."  My new friend peered over his glasses at me, smiled again, and said, "ALL the time, Jesus is our only hope."
From then on, I began to take note of how often people responded to  the  messages on my shirts, which was more frequently  than I would have expected.  Realizing  that  spurred me on to look for more  tee-shirts  with encouraging messages.  I soon found that I could be in the hallway  at Baptist or  UAMS or  St. Vincent's (my friend was transferred to all three of them before she died) and in every place, without exception, eventually someone who looked exhausted or  stressed.  would read the message on my shirt, smile and start talking about their loved one, their faith, whatever was on their mind.  By the time my own friend had moved to Heaven, I had pretty much decided that every time I went to the hospital, my shirt would have something on it that addressed both heart and soul needs.
Then I noticed that people in restaurants and stores would sometimes ask me about the message on my tee-shirt or comment on it. Once I made a quick trip to a convenience store just  to get gas. The receipt didn't print up as it was supposed to so I ran inside. I hadn't planned to go anywhere except to the gas pump and was wearing an older tee-shirt that actually had a Christmas message. (This was summer time, long past the Christmas season).  As the clerk was getting the receipt for me, she quietly said, "It's true."
I, being clueless, said, "What is true?"
She replied, "Your shirt."
I didn't even remember what I was wearing and had to look down to see the message - it was a picture of a baby in a manger and around the picture were the words, "His destiny was to change ours..." 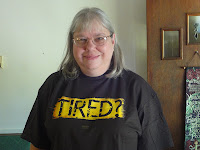 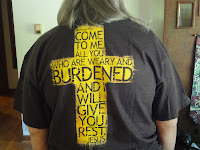 From there we went on to a discussion about how hard the day had been for her. The boss had fired everyone but her that very morning because he had learned that the  other clerks were selling drugs and stealing from the cash register. So she had had the store by herself and was working two shifts while he tried to transfer some other workers to her store to help out.  I was able to tell her that I would pray for her and from that time on, whenever I saw her in the store, we had a strong bond - we were sisters in the Lord and we knew it.
Now, some of my tee-shirts have comforting messages on them  while others, I hope, are funny but also thought provoking.  And sometimes people ask me questions about the humorous ones which also open up friendly dialogues.
And although I hope to swim regularly at Willow Springs  this summer and be somewhat of a less traditionally built lady when September rolls around, honestly, being a bill-board for Christianity is really okay with me!   And for that job, I figure being traditionally built is a definite plus!!
So move over, Mma Ramotswe :-)
(As I was reading this out loud to my long-suffering husband, he was laughing and then suddenly he stopped, looked a bit concerned and said, "Cathie, you aren't planning to open a detective agency, are you?"
Hmmmmmmm....
We'll see....
You never know with us traditionally built ladies who wear glasses and make high marks in school...:) 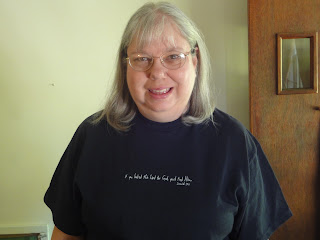 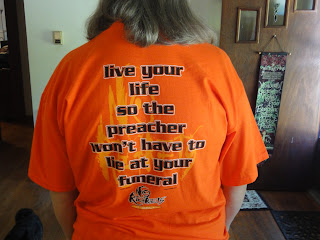