Life can present some fast learning curves...
Many years ago, I had an irate parent come in for a conference. To my surprise, this woman began to insult me personally, berate my assignments, and threaten to go over my head. I was young and didn't know what to do - the parent wouldn't give me time to talk and was practically shouting - so I got up and walked to an administrator's office. When we got there, I was totally floored to look back and see a sweet smile on her face whereas she had been so belligerent just minutes before.  I was even  more shocked to see her settle daintily into one of the chairs in the assistant principal's office - previously she had reminded me of a steam roller - while crossing one  shapely leg over another.  Then, while I tried not to let my lower jaw drop, she leaned forward so that even  more of her physical charms were showing.

However worse was yet to come.  She started off by saying that she had come to school to find out how to help her child but instead, I had just been rude to her. Then she teared up and  hesitantly mentioned that I had also insulted  her child's intelligence and proceeded to quote things I had never even thought, let alone said.   She ended with a wide-eyed appeal to the administrator, asking  if he might be able to help her work through this dilemma for the sake of her child, who struggled with self-esteem issues?       Fortunately, the administrator wasn't taken in by anything she said or did.  The conference itself was polite; he made sure I had a chance to suggest things to help the child; and then indicated to the parent that the conference was over.  She kept up the  sweetness-and-light  act to the very  end, leaving a faint scent of perfume behind her in the office as well as  a very bad taste in my mouth... 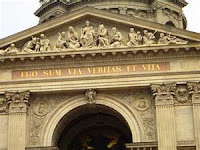 I think most people would agree that the type of blatant lying that this woman did was very wrong.   Other types of deception are not as clear-cut to us, maybe.
In my thirties, it was my time to lie.   I did volunteer work at a pro-life pregnancy clinic for one week - sort of a temporary fill-in.   The clinic had been built right next to an abortion clinic and had almost the exact same name.  The hope was that women seeking an abortion would go into the pro-life clinic by mistake and receive counseling that would persuade them to keep their unborn child.
I didn't believe in abortion at that time but was uncomfortable with the deception behind the name and location of the pro-life clinic.  However, I knew the people involved in the clinic were basically good, moral citizens.  One day a lady called wanting to know how to get to our clinic. When she asked me directly if we did abortions, I told her that we didn't.  She was confused, clearly thinking she had called the abortion clinic.  I apologized but told her we offered alternatives to abortion, mainly setting up the pregnant woman with sponsors during the pregnancy and aiding them in putting their babies up for adoption if they chose to do that. She was very nice but said she was really trying to reach the abortion clinic.  I was nice too - I figured she was in a tough place and I wasn't trying to make things worse for her.  When she asked if I could give her directions to the abortion clinic, I told her I was sorry but that  it was against our policy to do that. She said she understood and thanked me for my time. I wished her well and we ended the conversation  on an amiable note.   While I was talking, however,  I could see that the other volunteer in the office was not so amiable.  As soon as I hung up, the other woman  lit into me, having discerned from my side of the conversation that I could have promised the woman an abortion and given her directions to our clinic  but that I hadn't.  We got into a heated discussion with her telling me she would have said anything to get that woman into our office and to possibly save the life of the baby.
I understood her concern  but my problem was the Bible.  I had been memorizing II Cor. 4:1-2 at the time and it plainly said, "Therefore, since we have received this ministry, we do not lose heart, but we have renounced the things hidden because of shame, not walking in craftiness or adulterating the word of God, but by the manifestation of truth commending ourselves to every man's conscience in the sight of God."
As we argued, I began to verbalize the unease that I felt about the whole set-up, finally blurting out: do you think Christ would have set up a shop right next to the Pharisees' meeting place and given it an almost identical name??? That He would have done anything, including deception and outright lying, in order to lure people into His headquarters??? I mean, after all, He was trying to save souls, wasn't He????
Um, wrong thing to say!  If I thought the lady was mad before, I hadn't seen anything yet!! It wasn't until later that  I realized my question sent her into the ozone  because she  couldn't answer it and at the same time hang onto her solid belief in lying for the sake of a cause. It was my last day to volunteer at the clinic, by mutual agreement.

Life is complex and full of learning-curves.  Whether it's okay to lie or not sometimes, or maybe not exactly right to lie but not all that bad either... who can always tell?
I sure can't.  All I know is that I don't like to be lied to, even for a good cause. And that the Bible says we are to treat others the way we ourselves want to be treated.
Posted by Unknown at 3:40 PM