Today my niece took me out to eat at a nice restaurant and we had a good time.  As we were leaving, I heard an employee, a greeter  who was trying to touch base with everyone in the rather crowded lobby, turn to an older, distinguished looking gentleman and ask perkily, "Are you done with all your Valentine shopping?"

He responded quietly and without self-pity:  "Yes.  She's in Heaven."
The worker, who was scanning the group, responded heartily:  "That's great!  Wonderful!!"
Ouch!

The older gentleman didn't change his demeanor or say anything else as he left the restaurant.  He could have  though.  He could  have easily stopped and taken a minute or two to  set the worker straight.   Had he done that I'm sure the worker would have been embarrassed and more than ready to apologize, show empathy, whatever.
But he didn't.

And the fact that he didn't probably touched me as much as anything else.  He accepted her lack of interest in the same way that he appeared to accept the loss of his love.  With dignity and without fanfare.

Later I read in a book, Seeking Allah, Finding Jesus by Nabeel Qureshi, about a time years ago when Nabeel was sitting in Latin class in high school - surreptitiously doing his Spanish homework :) The teacher stepped out of the classroom for a bit and when she didn't return immediately, the girl behind Nabeel gathered up her courage and asked Nabeel if he had ever heard of Jesus.

Nabeel was interested in what she said and also  prepared (from having read Muslim material dissing Christianity).  The girl hung in there gamely but was not able to demolish his arguments even though he misquoted Scripture and used  reasoning that was not backed up by research.

But the thing that really hit me was this: right after the girl asked Nabeel if he had heard of Jesus, Nabeel thought, "Now I knew she was crazy.  We were in the middle of Latin class. At the same time, I immediately gained respect for her.  Why had other Christians never asked me this question?  They did think I needed Jesus to go to Heaven, right?  Were they content with letting me go to hell, or did they not really believe their faith?"  (P. 90).

Another owie moment, at least for me, on this day that celebrates and is dedicated to ... love.

Maybe on this day when we spend big bucks to prove our love, maybe we should just try to live out I Corinthians 13 and John 13:34-35.

Cheaper and less fattening than traditional cards, flowers, gifts, and candies. But lavish in the expenditure of time - not just with significant others but with others who are significant... to God Himself. 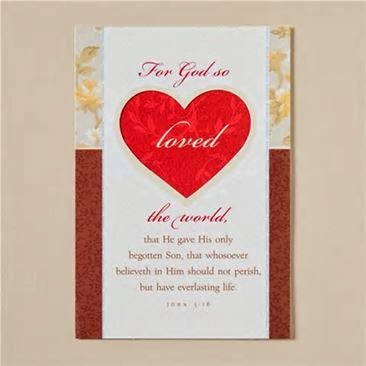