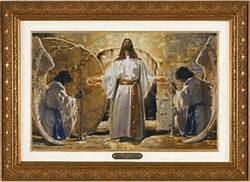 I've been to two funerals this week and after one - the one yesterday - I did some shopping and then  came home to find that our 16 year-old Rat Terrier had died.  (Unfortunately I had already been to three funerals in one week in January so my funeral-o-meter was already  about pegged out when this week came rolling in.)    When I found our dog yesterday - although I knew it was coming and had even prayed that God would help her to die peacefully before she started having pain - I felt shell-shocked.  I still do.  And that's a good thing.
When I was young, I didn't take death seriously. I never asked for whom the bell tolled because I was sure that it didn't toll  for me.  Like most young people, I subconsciously believed I was invincible.
By the time I was approaching middle age, I understood that it would come knocking at our door sooner or later but when the possibility came to mind,  I would just mentally shrug my shoulders and figure I could   handle it.  I mean, that's what people do, isn't it?  People are dying all the time and  the survivors somehow... survive.  They deal with it and they move on.  It's the American way, right?
Plus, we see it on t.v. all the time.  And on the news. It's everywhere, right?
And now, after about being funeraled-out, I wonder.  Do we see death for what it really is?
First, it is our enemy.  The Bible refers to death as the last enemy to be conquered.
Second, it is always there.  Every time we take a picture of a loved one, we are - whether we realize it or not - fighting against time and the reality that someday the person in the photo will be no more.  So I think it would be safe to say that our own mortality permeates our days and thoughts whether we are aware of it or not.
Third, it's so powerful that we've fashioned a whole set of conventions around death to help us transition through it without losing our sanity.  (More about that in another blog...)   These conventions or traditions grease our way through the splintery, dark days of grappling with the loss of a loved one.  Everyone knows what to do even if we don't know what to say - and it helps to be able to "do" something. We bake chicken. We send cards or e-mails.  We clean house. Or do laundry.  Or babysit.  We do a multitude of things to help make things easier for the survivors. 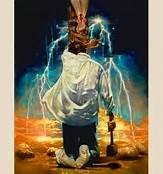 And what do the survivors do?  They notify the rest of the family. They plan the funeral. They dress up in their best and somehow manage to greet people during the visitation and then somehow manage to sit through the funeral, doing their best to show final respect for their loved one, to make him or her "proud".  Afterwards they may visit the grave site from time to time, go through photo albums, and/or sort through the things the loved one left behind.
This past week I went to one funeral where the deceased was obviously a Christian. I went to another where it seemed even the pastor who performed the service was not willing to say the deceased had made his peace with God. He would only say, "If so-and-so made his peace with God, then he is in a better place."  There was a huge difference between the two services. Trust me on this.
And then I came home to find a beloved pet stretched out on the floor in a way she never did in life, a mere skeleton of her normal self, her eyes glazed over and this was the deal: I couldn't gloss over the reality - even the sheer ugliness -  of death.  I couldn't just shrug my shoulders and  think, "Well, when it comes, we'll just handle it."
Handle it?  Are you kidding me?
I could barely handle two funerals this week and I wasn't even  dealing with the loss of a  family member.  Still,  I should own stock in Kleenex right now.  And now I can't even look at the spot where our terrier slept in the living room without bursting into tears. Just looking at the spot by my  chair where she slept makes me bawl.  And she was just a pet.
What about the families who lost their loved ones this week????
And this is what we're just supposed to "handle????"

Death stinks and every program that glorifies it should be fined for making light of something that is anything but...
This week has just made me want to reach out to total strangers and say: if you haven't made your peace with God and if you aren't sure that you are going to be with Him when you die, then take care of it now. It's more important than paying the bills, going to the movies, hanging out with friends, washing the car, getting that promotion at work, remodeling the house, playing at church, making that speech, carrying out the trash, washing the dishes, working late at the office.  And it's waaaaaaay more important than cheating on your spouse, getting soused, neglecting your kids, letting your temper have full reign, and/or manipulating others to get "ahead", among other unsavory things which will kick you further down the road  away from God, not closer to Him.

Making peace with God is just this:  more important.   No. It's the most important thing you'll ever do.
Because death is real, it's ugly, and   it's not something that you just "handle".  And we don't need to ask for whom the bell tolls - it really does toll for us.
Sorry to be so blunt but that's another thing about death - and it's a good thing.
Death has a way of making minor things seem very minor and major things seem very major.
And being right with the one true, eternal, omnipotent God is, frankly, very, very major.
So important that God sent His son to die for you. 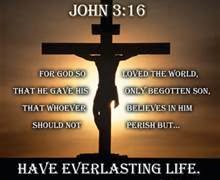