I had a wonderful time at the IFO Ladies Spring Tea. It's an afternoon when American  women and young ladies give sacrificially of their time, possessions, and talents in order to "roll out the red carpet" for international women living in this area.   It's not easy to be uprooted from your homeland, move to a different country and start a whole new life. How would I handle something like that? Not well, I think.  Strange language, weird customs, most family members thousands of miles away - so many tough obstacles to be reckoned with. And what if you were one of those who didn't come to get an education but instead, came simply to avoid being killed?   What if you came from a place like Syria or Sudan where fighting is rife? Truly, these women - all of them no matter why they are here -  deserve to be pampered and catered to one afternoon a year.


As for the tea itself, you could look around and see that the women planning it wanted to offer only the very best to their international sisters.   I'm telling you - the food was luxurious and  I'm  afraid I loved every bit of it... At one point, the server standing next to me (who is several sizes smaller than I!) turned to me and said that when the native dress "fashion show" started, she thought she might eat a sandwich while no one was looking. She asked me if I thought that was okay but I'm afraid I couldn't answer - I'd already popped a chicken sandwich into my mouth and, like an anaconda,  was trying to swallow it whole... Ha!
And as you can see from the pictures, the tables were beautifully arrayed - yet another way of saying, "We think all of you ladies are special and deserving of our very best.  Nothing less will do..." Which I thought was so appropriate.
Except that there was one table that wasn't really elegant at all.  Instead of beautiful tea things and gorgeous plates waiting to be carried to the tables, there were practical  multi-color bags, plain woven baskets, multi-color place mats, and homemade beaded necklaces. And then, beside that table were two posters with pictures of children on them - children who were clothed and fed and who looked happy.
This display table actually  highlighted a ministry called Lighthouse Children's Home; the items were for sale and the proceeds would go to help support the children in the photos.  Some of the items were made by the children in Rwanda who live at Lighthouse and some of the items were made by two young American girls who have become "sisters" to our guest speaker and the founder of Lighthouse Ministries, Anita. 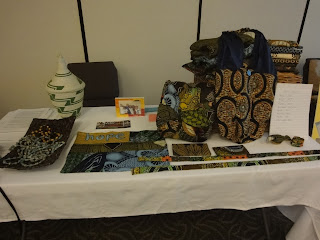 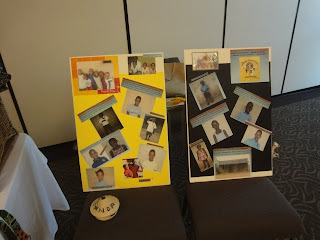 After coming from such a horrendous childhood, this beautiful young woman stood before us today and said clearly,  without any  hesitation,  that everything God allows, He allows for a purpose. She basically told us that the pain of yesterday (and today)  holds the promise of tomorrow ... if it is allowed to rest in the Creator's hands. And then she reminded us that in Ephesians 3 there is a promise that we can put our finger on - or as we say here in America - a promise that we can "take to the bank".   That promise, as Anita puts it, is that God can do "much more" - more than we can ever think or ask or even dream. That is our God. Then she proved it by giving us several examples of how God has enabled her to do His "much more", including making a film of her life story and providing a home for 13 former street children.
In short, she gave us a lot to think about.
What resonated with me from her whole story was that first of all, Jesus was the difference - He changed her life from night to day.  Secondly, her transformation didn't begin with Jesus walking off the pages of Scripture into her heart - her journey didn't begin with VBS, a Bible class,  or a video even though all of those things are good.
No, Anita's story  started with Christians who were willing to take time for an angry, hostile, almost savage girl covered in dirt and scars, both visible and invisible. And it came to fruition under one teacher who showed this dangerously angry spitfire of a teen day in and day out, month after month,  that he loved her without expecting anything in return.
As I was driving to the International Tea this afternoon, I was praying that the international ladies would feel the joy and the love of God as they interacted with the Christian women who would be helping them and serving them.  I don't know if that happened or not but I do know that I definitely felt His love and His joy as I experienced the privilege of mingling  with these beautiful ladies  from other lands.  Their smiles I won't soon forget, nor their graciousness as I clumsily served tea, spilled water, and tried to grab  plates that they weren't quite finished with yet!
I wasn't surprised at the joy I experienced being around the ladies at my table. However, I was very surprised to be lifted out of my  elegant surroundings, totally  caught up in Anita's vivid tale and the horrors that it evoked.  I've dealt with angry, dysfunctional kids during my years in teaching but until today, I never really understood why they made "poor choices" that, in my eyes, only made their situation worse.
However, even beyond that "aha" moment (which came about 30 years too late), I had to wonder...    If I met an Anita in the making today, right now, this very  minute - would I be the one person to extend love to that hostile child day in and day out,  giving verbally, tangibly, emotionally  - without reserve and  without asking anything in return? Would I be the one to extend the love of Christ month after month without seeing any results for what would probably seem like forever? Or would I give up and say, "This kid is hopeless!!" or "I'm tired of pouring my life, my money, and my time into this ungrateful kid's life!"
And perhaps even more to the point, would I be the one to kneel beside an empty chair or bed and pour out my heart to God on behalf of a kid who literally hated me?
Today, a young woman named Anita, a true Christ follower, made me think.
And I'm thinking still..
Would I be the one???
Based on my past track record, I would have to say "no".
It's late as I finish this blog and my knees are not in the best of shape but I promise you - before I go to bed tonight, I will be on my knees, even if for just a short time, and I will be asking God to bring to mind the Anitas of my world who have a future and a hope, simply because He lives. And He loves. Through us who follow His Son.