When I was about 12, I went to the Gulf of Mexico with my youth group. I had never been to the Gulf or to any large body of water and I was thrilled. Before long I was sitting near the shallow water, making a sand castle, thinking I was really cool stuff in my cute bathing suit, so far away from home.  Can we say, "Big adventure????"
The water began to lap up closer to my creation but I just sat there, unconcerned, still building my sand castle.  As I concentrated on my work, a small wave came towards me.  I saw it but didn't think much about it.  Until it "slapped" at me and, to my surprise, I instinctively slapped back at it -not kidding!  My hand of course, sliced right through the water and the next wave plowed right into me, turning me tip over whatever as they say,  landing me right on my soggy posterior.  Needless to say, my sand castle was no more.... It was one of those  memorable looking-over-the-shoulder moments to see if anyone was watching....:)
I'm pretty sure that my science teacher had tried to educate me about the density and power of water but what he obviously had not accomplished in an entire 9 month period of classes, nature accomplished in about 30 seconds.  Suddenly, I understood the power of water a whole lot better than I ever had before!  I lost my sand castle but I gained a healthy respect for waves, large and small, that has never left me!

The same with ice.  I understood the scientific principles behind "bridge may ice over" etc.  Everybody knows cold air flows under a bridge.  If the air is cold enough and precipitation is falling, regular roads may be just wet while the bridge may be as slick as axle grease...  I "got that" or so I thought.  Until one evening, when it was raining and the temperature was hovering around 31 degrees and I was driving home from church, radio on, heater on, happy as a clam in the drizzle. And then, voila!  Suddenly I was putting on a show for the people in the car behind me, sliding toward a bridge railing and then pirouetting gracefully towards the next railing, which I also hit, and then finally coming to a rest that would have made the makers of the Disney film, Cars, envious - basically ending up backwards in the median.
I can still remember reaching down to the floorboard to find my glasses and rubbing my forehead where I had hit the ceiling. I also remember the open-mouthed expressions of wonder on the faces of the people in the car behind me as they slowly, gingerly passed me.  And I remember vividly, a few hours later, telling my brother about the wreck.  He was all sympathy until he broached the "$64.00 question":  Cathy, were you wearing your seat belt?
Let's just say that my brother is big on safety and before that accident, I, um... wasn't.  He had reminded me from time to time to wear my seat belt and had also patiently explained why it was best to do so. But I was too smart to worry about things like that!  For me, the seat belts were too restrictive. (i.e., wrinkled up my  cute dresses...)  The signs on the bridge about icing over in cold weather  were just fodder for my sparkling wit.    Bridge may ice over...  Duhhhh...  Tell me something I don't know... Ha!

After I proved that, yes, bridges can ice over when wet, my wit sort of went missing. And when Glen asked me if I been wearing my seat belt, I wasn't so cocky as I answered, "No, I'm afraid I wasn't."  The next thing out of my brother's mouth was, "I'll talk to you later." Click! I knew he was upset and that was his way of not "unloading" on me for ignoring his sound advice and putting myself in danger.
However, again there was an upside to that little adventure on ice.  I mean, just think!!!   I learned the power of combining a moving car with traction-less ice and I got a wild ride into the bargain!  Awesome!   (Not.... )
My point is this: if we need to understand the nature of wind, fire, flood, and, um, ice (not to mention lightening... ha!), don't we also need to understand the nature of God who made them all?   If you don't believe in God, then the answer to this question is clearly "no". But if you profess to believe in God, then shouldn't it be a priority to know Him  as He really is and not just as we want Him to be or think Him to be?
When I read in the Tanakh (the Old Testament), I see over and over that God let His chosen people beat their heads up against difficult, even tragic circumstances because they kept thinking they had Him all figured out when they didn't.  Over and over, He worked to reveal Himself to them and over and over, they kept veering off after false gods.  Finally, He just took  His hands off them and said, "Okay, follow the desire of your heart, trust in your own intellect and see where it gets you.  After you've done it your way and found yourself sliding on thin ice and hitting a wall, after you've suffered, after you've followed the trail of your desire to it's broken end, you will look up. I will be there. I will gather you to Myself. And finally, you will know Me."
I am 100% sincere when I say that I'm so glad the God of the universe loves  us and wants us to know Him personally.   I'm equally sincere when I say that I don't want to be so hardheaded that He has to take His hands off my life and let me learn the hard way. Yet I know I can be.
Right now it seems to me that our approach as a modern  nation to God is so cavalier that it's scary.  I don't mean that lightly.  We take our theology from television, from talk show hosts, from subjective accounts of spiritual adventures and even from our own wishful thinking.  God will never do such and such...    The Bible is outdated....   Oprah says.... This scientist swears that he experienced...   I mean, God loves everybody...
God does love everybody, no question.  But above all, He wants us to know Him, depend on Him, and base our lives on solid truth. Truth matters more than we, in this day and age, seem to realize.  The truth is that when a twelve year old girl gets in a contest with an ocean wave, the wave will win! (I truly  thought I understood water  because I had messed around in a kiddie pool and dog paddled around in a pond!)   I needed to learn to respect water (and ice!), not for what I thought it was like, but for what it really is.  If this is true about the elements of nature, how much more true is it about the nature of our creator, the One with whom we will all eventually have to do?
Jesus said,  "Therefore everyone who hears these words of Mine, and acts upon them, may be compared to to a wise man, who built his house upon the rock,
and the rain descended, and the floods came, and the winds blew and burst against that house and yet it did not fall, for it had been founded upon the rock. 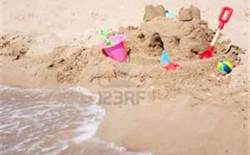 And everyone who hears these words of Mine, and does not act upon them, will be like a foolish man who built his house upon the sand.
And the rains descended, and the floods came, and the winds blew, and burst against that house, and it fell, and great was its fall.
Matthew 7:24 - 27.

Sometimes when I pray, I just stop and ask God to help me know the truth, to protect me from deception, to enable me to really know Him as He is, not as I think He is.  It's good prayer, one He's never failed to answer.

If you haven't prayed that prayer lately (or ever), would you consider giving it a try?
Just sayin' 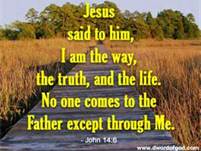