Taking the Turns Right Along With Me...


Phil and I like the movie, Driving Miss Daisy.  In one scene, Miss Daisy and the Chauffeur are on a trip and they get lost.  She gets upset and blames the driver. He responds with something like, "Why, Miss Daisy... You took the turns right along with me!"
After over a quarter of a century of marriage, Phil and I sometimes look at each other and say, "Thanks for taking the turns right along with me..."
I really am grateful that God has given Phil to me and allowed us to take a lot of "corners" together.  Sometimes we knew exactly what we were doing; probably most of the time we didn't. If we co-authored a marriage manual, it would probably be titled, "Marriage: Flying by the Seat of Your Pants," or "Marriage: What Not to Do."
When we married I was several dress sizes smaller than I am now.  I can remember shortly after we exchanged vows, standing on his feet -one of my feet on top of one of his - while he danced me around the room.  Now, if we tried that, he wouldn't have any arches left.
I loved dresses and sandals and jewelry 26 years ago.  It's been a while since problems with my feet led to wearing jogging shoes year round which lead to wearing slacks year round which cut down on my desire for jewelry as sparkly things don't go with combat looking jogging shoes and perpetual slacks.
When we married, we loved to walk and/or jog through the neighborhood. I remember during our first years of marriage, when we came home from Sunday night service, Phil would let our dog, Rascal, out of the house and then start running around the house with Rascal hot on his heels. The thing about Rascal was that he lacked common sense.  So Phil would put distance between himself and this idiotic dog until there was enough lag time between them. And then, when Rascal was just around the corner and out of Phil's sight, my husband would jump on the front porch, flatten himself against the side of the house and stay there, silently watching Rascal looping the house: once, twice, and sometimes three times before he'd realize that something wasn't right.
At first this game worried me.  What would the neighbors, especially  the retired couple next door, think?  When I couldn't talk Phil into quitting this Sunday night routine, one evening I threw up my hands and  joined him!  So there we were, after the evening service, all three of us looping around the house, two of us trying to outwit the third who happened to be a dog.
Now when we come home on Sunday morning, Phil carries my Bible bag for me and when we go walking down the street for exercise, I carry a cane sometimes - mostly for discouraging stray dogs from following after us but not completely.  He's always been more than willing to carry my book bag into and out of church but my bright pink bags or the ones with floral designs were a little off-putting to him.  So I got a  hefty, tweed-looking book bag from Barnes and Nobles and for the most part, he's satisfied with that, feels his manly image is untarnished... :)  Twenty-six years ago, I never envisioned him having to carry my book bag to church or me walking with a cane because the weather is changing and my knee is, as my grandmother would say, "telling me a story."
Sometimes I look in the mirror and would love to have that thirty-something, younger person staring back at me once again.  At those times, I often turn to Phil and thank him for taking the turns right along with me.  He usually responds by saying the same thing back to me.  Thank you for taking the turns right along with me.
This weekend, to my surprise he responded a little differently.  Instead of the usual Miss Daisy quote, he said, "Cathy, I couldn't imagine being married to anyone who loved the Lord less than you do..."
Twenty-six years ago, we were an unlikely pair and maybe some (like my mother...:) didn't think we'd make it.  But we knew God had brought us together and that has made all the difference in the world. 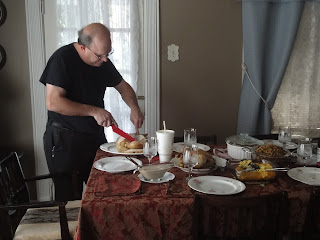 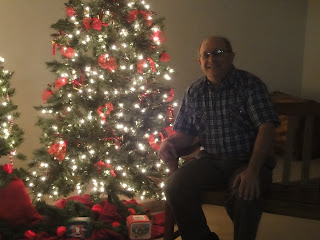 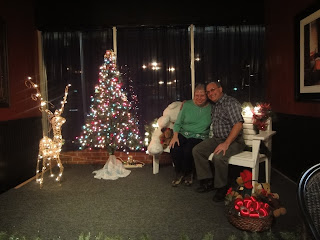