I live in Arkansas so it's normal to have sinus trouble, right?  And yesterday I had a headache along with sinus stuff and that's also normal.
Only my headache wasn't from sinuses.
How do I know?  Every once in a while yesterday, the random thought, "I need to cry" would sweep across my mind.  Because of that, I knew my problem was heart, not head.
And indeed, my heart was in pain while the rest of me was in denial.
My unshed tears (and anger) were for the incredible pain and suffering that happened in Rwanda in 1994, suffering that could have been prevented.  That may sound crazy.  I mean, I'd read two books about the genocide before so ... I'd already shed my tears, right?
Apparently not. Third book; third bout of crying.
So  maybe it is a good thing to cry???   I mean, do I ever really want to get to the place where I can read about people being butchered without shedding tears? Without getting a headache? Without, ultimately, crying out to my God, "Why?"  (And I know that maybe we're not supposed to ask God "why" but sometimes He graciously lets me...)
Last night, the pain was so great that I had no where to go but to Him. As I poured out my heart to Him, He led me to a quote from, of all things, an Anglican Vicar in Baghdad, Andrew White.  A man who also serves in a troubled place, in Iraq, where people lose their lives every day.  So how can reading about one ministry in the midst of a killing field help me cope with the pain of reading about another killing field?  Doesn't make sense, does it?
And yet I came across a quote from the Vicar of Baghdad  which basically said (I'm paraphrasing)  that he can see concrete barricades and barbed wire from his office window. When he sees those things, he can either say, "How terrible it is to see those implements of war and terrorism!" or he can choose to say, "How wonderful it is that God's presence is here with us, ministering to us!"
That quote was God's answer to my pain last night.
The genocide in Rwanda didn't come close to the magnitude of what Hitler did by any means. But in some ways, the butchery and cruelty of it surpassed what the Germans did.  The Rwandans killed nearly a million people in the space of three months and without any concentration camps.  That means that this  genocide was carried out when  millions of ordinary people - people who were stoked on propaganda and fear -  went into what I can only describe as a Satanic killing frenzy, mutilating, raping, and destroying their neighbors and friends in much the same way that sharks go into a mindless feeding frenzy.
That story is what made me cry and made my head hurt.
But what brought relief to my heart was the understanding that out of the ashes, God is doing miracles in Rwanda today.
Please let me explain.
History shows that it is fairly easy for man to kill. Our human nature tells us that it is very hard to forgive.
When Americans talk about forgiveness and Rwandans talk about forgiveness, we aren't talking the same things.
Forgiveness to a Rwandan is not about refraining from saying nasty words about the nut who just cut you off in traffic and nearly ran you off the road.
It is not even about forgiving the ex-spouse who went into court, hired an expensive lawyer, lied, and took your children away from you.
It is not even about the pastor who ran off with the church funds and another man's wife, leaving a fragmented congregation and a broken-hearted wife behind to pick up the pieces.
It is not even about forgiving the drunk driver who hit your wife's car head-on and killed her, as bad as that is.
It is not even, sad to say, about forgiving the man who raped and killed your college-age daughter.
All of those things are bad to varying degrees. But none of them are as bad as what happened in Rwanda.
In Rwanda, it was not unusual for a  mother to  be forced to watch her children hacked to death with machetes before she herself was gang-raped and left for dead. This was very common.  This and much, much worse.
In Rwanda, a pastor or priest might encourage his people to come to the church for safety and then help lock the people inside so the extremists could kill them more efficiently. This goes beyond, "Our preacher offended some people and now there's been a split in the congregation and I don't know where I'll go to church or how I'll ever forgive him for what he did."
But the miracle is this:  the Rwandans are forgiving, they are reconciling. Even these things, they are forgiving.
Today, Rwanda is a nation that has rebuilt, that has risen from the ashes.    Usually when a nation is in ruins, it stays that way for a long time. (Just ask the people of Somalia or Sudan)  Not Rwanda.
Today, the watch word in Rwanda is "reconciliation" and the people are living it.
Today, Rwandans are living side-by-side, former killers and former victims. It is not easy but they are doing it.
I read a quote by a UN General, Dalliare, who was asked, after he witnessed the genocide, "How can you still believe in God after seeing all that?"  He replied that he believed in God because he had shaken hands with the devil.
The 1994 genocide, as much as anything I've ever read about, proves Satan exists.
By the same token, the reconciliation and forgiveness that has occurred and still is occurring even as I write this, demonstrates clearly that God is working in Rwanda.

The Western world failed Rwanda in 1994.  Now we have a chance to help make that up, if in no other way, by at least praying for these people - people whom God loves deeply and unreservedly.
May we do the same. 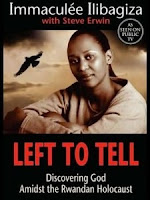 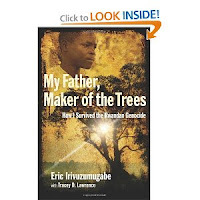