I see LOL (laugh out loud) a lot these days. But the truth is, I've reached that stage of life where I have to Think Out Loud because the years have taken a toll on my brain cells and I need to not only think, but also say and hear what I'm trying to process, just for good measure.  And now, I'm also reduced to seeing my thoughts on "paper" soooo... think of this blog as an adult version of the toy my child used to play with, a plastic contraption called "See and Say"...  Basically, today, I'm trying to "see and say" my way through new ideas, at least for me...:)

I finished  Russell Stendal's book last night and in it, he includes a brief lesson on the Beatitudes.  And it's that lesson I'm trying to sift through and sort out in my own mind this morning.
I'm familiar with the beatitudes (and even got to see the Mount of Beatitudes when I was in Israel - too cool!).  They are the "blessed are the..." Scriptures which start off the Sermon on the Mount in Matthew 5:3-10.
Once I asked some teen-agers to read over these verses and tell me what came to mind as they read them.  The kids came from  a mix of various backgrounds. Most of them didn't understand the verses.  Two of them were actually offended.  Doesn't God mean for us to be happy????  Well then, God doesn't want us to be poor! He wants us to be rich!
Well, yes.. and no... I mean, blessings should bring smiles to our hearts, I would think. And God's blessings should be like riches in the bank, again in my way of thinking.  And sometimes His blessings definitely include money and possessions and when that happens, it's a good thing.  But His ultimate blessings, I think, go so much deeper. And sometimes extra cash and excessive possessions can get in the way of those blessings... the best ones.
I think that is what James means when he writes, "Did not God choose the poor of this world to be rich in faith and heirs of the kingdom which He promised to those who love Him?"  James 2.  It's not that God doesn't love the wealthy.  He loves them and He is, by definition, the giver of all good things.  But if you read the Bible, you have to admit that God seems to like the poor as well.  And that in His economy, richer is not always better. (Luke 16:13-15)
At any rate,  the opening statement of Christ's most famous sermon is undeniably:
Blessed are those who are poor in spirit...
I don't think I've ever heard a sermon start off that way, myself, except for this one by Christ Himself. I think maybe Christ was not a crowd-pleasing preacher... Just a thought...
At any rate, Stendal thinks that the Beatitudes are not only important for what they say. which is admittedly, kind of shocking,  but also for the order in which they say it. In other words, he feels that the Beatitudes build on each other, lead to each other.
Looking at these verses as a progression from one to another, this is how the "Blessed are's..." pans out for him (according to my loose paraphrase of his ideas): 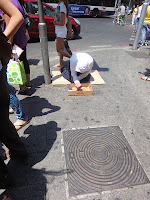 
2.  Blessed are those who now belong to God, whose eyes have been opened - who see the blackness of their sin because they see it the way God sees it - and now they grieve for those sins.  Those that mourn will be comforted by God Himself.  By God... Himself... Amazing!


3.  Blessed are those who learn to obey their king - who are meek in that they single-mindedly ditch their agenda in order to follow His.  AS they meekly submit to Him, He  leads them into deeper spiritual territory, even into warfare, giving them a strong desire for His righteousness, writing His law on their new hearts...


4.   Blessed are those who are now hot on the spiritual trail, hungering  and thirsting  for His righteousness.  Because He gives what they now crave in abundance!  At the same time, lesser things - like acquiring stuff, getting revenge, and receiving admiration - these things drop off the radar screen. Which leads to the next Blessing!


5.  Blessed are those who are now able to show mercy! For as they show mercy to people they once hated, ignored, or even used in order to get ahead,  they will receive more and more of God's mercy. To paraphrase something LeTourneau said (thanks, Greg!), Christ-followers shovel (money, mercy, etc) into God's work and He shovels it right back. Only He has a bigger shovel!


6.   Blessed are those whose hearts are  now becoming more and more pure.  For as righteousness and mercy push out unrighteousness and bitterness,  hearts become purer, spiritual vision becomes clearer (cataracts are removed!) and it becomes  easier  to see Him and know Him as He really is - in all His purity. And those who see God are definitely blessed.


7.   Blessed are those  merciful, pure-hearted people who now seek to make peace everywhere they go, who pray to be able to bring God's peace into every meeting they attend, every heart they encounter. Clearly, people like these can only belong to God; they are His true children.


8.   Blessed are those who are persecuted because they live and walk according to a kingdom that is not of this world.
This is a tough one... Yet it happens and God said it would.  Serving at the pleasure of a foreign King against the displeasure of the Prince of this World.  Living as ambassadors but also like aliens and exiles, longing for home where forgiveness, peace, and love are the norm - where God is... Yet, at the same time, determined to carry out  royal assignments, even if it kills us - which sometimes, honestly, it does.
So how is there a blessing in this....? For the Kingdom of Heaven is theirs.... That's the blessing in even this.  Not a blessing from our human point of view.  But...
That's only because we haven't seen the Father's kingdom yet in all its glory.
They have...
Posted by Unknown at 2:15 PM