It's been a crazy day... No, that's wrong.. It's been a crazy week.  And it's only half over:)
I worked with toddlers at church on Sunday as a pinch-hitter. I still can't decide if they were more like a swarm of bees or a hill of ants.  I do know the little people were everywhere.  Running, crawling, tumbling (on mats), pulling toys off shelves, crying, laughing, grabbing at my glasses, dropping sippy cups everywhere  - I'm pretty sure we covered the gamut of toddler emotions and favorite things to do.  Thank goodness that the other two women in that room knew what they were doing!  The kids' faces were as sweet as can be (when they weren't crying or trying to hit each other.. Ha!).  But there were a little too many of them for my toddler-coping skills.  The other ladies seemed to take everything in stride. Me? I came home, took two aspirin and went to bed. ..
Monday is always a little busy.  This Monday was no exception! But it was a good day and I accomplished some things that needed to be done.
Tuesday morning I  got a phone call out of the blue asking me to consider subbing next year from Sept. to Christmas break.  I was hoping I'd get a call saying I'd won the lottery... even though I don't buy lottery tickets.  (Seems like other people have won the lottery without buying tickets.. or is that my imagination?)
I didn't consider the call asking me to sub to be the same as winning the lottery by any means!  However,  I did promise to pray about it.  And I have done that.  Now,  over 24 hours later, I'm still praying only tonight my prayers are:  "Lord, show them who else to call...."   At any rate, I went to my husband's work to talk to him  about the job offer. Then I went to school to discuss things with some of my friends there.  The bottom line is that I would love to work with my former colleagues again but not at the price of subbing for three and a half months!

When I get calls like that from nowhere, I turn to chocolate. Hit the Hersey's twice yesterday.
Today?  Let's just say it  was a three Hersey  Day:)  I have wanted to do Home Stay with internationals again, after a hiatus of about 10 years. But I never felt like we had the time once our son hit middle school.  Recently, I heard of a need for home stay and just really wanted to do it. Our son is grown. I'm retired.  It just seemed like it would be a neat thing to get back into the program.   But at the same time, it would mean some shifting around in the house to get ready, etc.  Change, basically. So I didn't follow through on this desire.
The opportunity to volunteer came a second time; again I wanted to do it and yet I was still  unsure. I felt like there were so many others out there who would jump at the chance to take in an international, people with bigger houses than ours.  However, I began praying about it  and yesterday I told the Lord that if a third call went out asking for volunteers, I'd talk to my husband and if he was in favor of it, I'd say yes.
Sure enough, this morning there was one more call for volunteers to open up their homes.  I talked to my husband and my son and they were both for it.  So suddenly  things went into high gear around here as  we began  rearranging the spare bedroom (i.e., transforming it from a storage area back into a bedroom), thinking about how it would all work from day to day, researching the student's country to see what their native language is and what types of food they like to eat (bananas, beans, and potatoes - we're good!),  and last but not least, wondering if there is a student out there who likes rat terriers and thinks nothing of seeing a person walk through the house with a cockatiel sitting  on his shoulder:)      At this point,  I still don't know if we'll be allowed the privilege of having an international student live with us again but in the hopes that we will, things are in full swing at the Abernathy house in order to get ready for our new  family member.
I love doing things like this once the person is actually here.  But as I began to pull extraneous stuff (blankets, pictures, clothes that I think I might be able to get into again  some day, purses (that are still good!), a box of Christmas decorations, etc) out of the guest room, I found that today was not a two Hersey bar day but rather a three Hersey bar day!
Still, I wouldn't trade this day for anything.  We've prayed together, laughed together and  at times, looked at each other with raised eyebrows like, "Are you crazy or am I?"  Only the bird seems to have taken everything in his stride:) For us, it's an exciting thing, to know that someone new from another country may be part of our lives within a few weeks. Our experiences in the past with home stay have been good and in one case, our "temporary" family member became a permanent family member!  So cool! 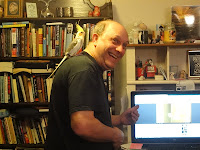 On the other hand,  if it doesn't work out this time around, then we'll still have the guest bedroom straightened out and orderly.  So whatever the result, something good will come from it.  But of course, I'm hoping we'll get to reach out to someone, knowing we will be blessed in return.
Also hoping we will maintain Hersey altitude at 3 bars and holding or  throttle  back down to two or even one tomorrow.  Then yogurt by Friday... :)