Lessons from the desert... 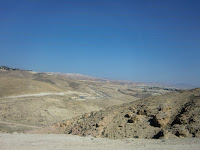 This is not the best shot of what we saw - neither of us had our cameras ready when we came upon the desert. But maybe it gives some idea of the landscape.
Posted by Unknown at 11:10 AM