As my friends and family all know, I'm going through a time of transition as I officially start my retirement!  This summer however has been... life as usual.  As someone said, "honey days" and "onion days"! And if God were grading on a pass/fail system, I could also add, some days have been "pass", some days (or weeks)... naaahhhh.... didn't make it as a victorious Christian!
Last  week was recuperate week, unpack week, survive remodeling week,  and get David back into school week:)
So I guess it wasn't really until this morning that I was able to actually be quiet, feel rested, and also reflect on past successes and failures, future plans etc.  (Translate: the guys are both gone, the suitcases are unpacked, and life is getting back on track... Remodeled bathroom partially works.. life is good.. Although now Phil says he's going to re-do the kitchen!!) 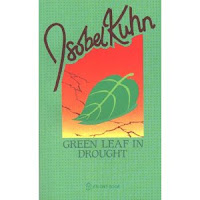 As I read in the Bible and thought about things, my thoughts went to a couple of books (I know!!! I know!!!! What else??? I need to get a life... I know!!!!).  At any rate, one dog-eared book is a biography by Isobelle Kuhn called Green Leaf in Drought.*   The title is taken from Jeremiah 17:8 and the story is about Wilda and Arthur Matthews, two of the last OMF missionaries to be released from Communist China in the 1950's.  For a year or so, the communists had tried to starve Arthur (literally - not kidding), his wife, and their toddler.  But it just didn't happen. God provided food and money for them in unlikely ways. Not an abundance but enough to sustain them.

The other book is called Born for Battle*.  It's also a slender paperback and very dog-eared by now:)  This book was actually written in the 1960's by Arthur Matthews himself. At that time, he was battling Lou Gehrig's disease and he wanted to write down what he had learned about prayer over the years while he was still able to do so.  In other words, he didn't want to waste either his illness or the life-lessons God had taught him.  The book is written sort of like a devotional - you can read each chapter (they are short)  over a period of a few weeks and learn practical ways to pray through difficult times.
As I got both of these paperbacks down from the  shelf, I opened the Isobelle Kuhn book to a page that was very dog-eared and saw something that kind of put things into perspective for me.  During Arthur's time as a house prisoner of the communists, he began to experience terrible tooth pain. By this time they were just barely able to get milk for their toddler but had none for themselves and were existing on a really meager diet.  Also, each month he had to go to the Communist authorities and fill out lengthy papers and grovel in order to get permission to draw a small sum from his own bank account... Yep, it was his money but the communists had taken control of it.
Having experienced deprivations for months and having no clue when it would ever end, Arthur was close to despair. And then someone sent him a small pocket calendar and on the back of it he wrote these words:
Cast four anchors and prayed.. a veiled reference to Acts. 27:27-29.  The "four anchors" that Arthur "threw out" in the midst of his storm were actually points from Andrew Murray's writings that he  began to put into practice there in China.  They are:
1.  Say when in trial - He brought me here.  It is by His will I am in this strait place and in that fact I will rest.
2.  He will keep me here in His love and give me grace to behave as His child.
3.  Then He will make the trial a blessing, teaching me the lessons He intends for me to learn.
4.  In His good time He can bring me out again - how and when He knows.
So let me say:
I am 1) here in this trial by God's appointment.
2)  I am in His keeping.
3)  I am under His training.
4)  I am here for His time.
As I look back over some of my non-chill times this summer - and there were some doozies - I think I need to have those four anchors typed up and taped to my forehead!! (Or maybe stapled to my jogging shoes so that I can really see them each day!  As if I jog.... Ha!)  Still, I was glad to be reminded of them this morning.  God is good.  Even if yesterday was a bust spiritually, each day is a new opportunity by His grace!

*I got my copies from Overseas Missionary Fellowship's website but apparently Amazon also has them but not for Kindle.  Of the two, Born for Battle is my favorite, maybe b/c it is so practical.