Israel is different and you know you're not in the South (of the U.S., that is) almost as soon as you land. Here you can smile at people on the street and you'll often get a smile in response.  I didn't find that to be true there - people seemed busy, confident, determined, focused.  I didn't hear the words "please", "thank-you", and "excuse me" hardly at all in public and I came to feel awkward for saying those words so much myself.
I came to realize that this is the deal: life is tough in this little country (smaller than Arkansas) and it's hard to smile at strangers when you're wondering if the person passing you is a potential bomber.  I realized that people weren't just unwilling to return smiles from strangers, some of them were actually scrutinizing strangers, something we do in the "bad" part of town, something they do in any part of town.
Three experiences from this trip brought this home for me.
First the trip to Yad VAshem, the Holocaust Museum.  On the way there, our host stopped at a military cemetery and showed us the grave of his father who died in the 1948 War when he was just a young man with a wife and a baby.  I realized our host never had the chance to know his father.  Then we stopped at the graves of some famous people such as Yitzak Rabin and Golda Meir, years apart in their times of service but dealing with the same issue - how to protect Israel and find peace that seems to be ever elusive...
Then we went to Yad Vashem where no one is allowed to take pictures.  About a fourth of the way through, I was crying and the thought went through my mind:  maybe I'm wrong. Maybe there is no God after all.  Almost as soon as that thought went through my mind, I was enveloped by a sense of His nearness and I knew that He does exist.    (It wasn't until later that I realized it was actually Sunday - my sense of time was so messed up the whole time I was in Israel - and that when I felt His presence, it was time for Sunday School to start back home. Amazing.  6,000 miles from home. Prayer works... ).   At any rate, Yad Vashem is well-done and very moving, tough to walk through. But it was something I had to do and I think everyone who goes to Israel should walk through this memorial alongside generations of Israelis for whom this is a record of their own personal history, their own family members. As we would say over here - it is personal - very much so...One live image stands out for me in particular. A young, attractive Israeli woman who was obviously pregnant, holding the small hand of a pre-schooler. Tears were silently running down her face while her child looked around with total innocence. 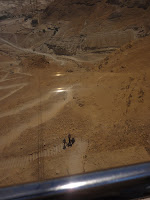 The second experience was standing on top of Masada.  A group of Jewish families - over 900 in number - had held out against the Ancient Romans for several years.  The Romans were determined to get this group because the more slaves they marched into Rome, the bigger the press they received.  As the Romans finally built a rampart to the top of Masada, the Jews could have dropped boulders, boiling oil, etc on the slave workers but they didn't.  Because the slaves were Jewish, their relatives.  Instead they weighed their options: surrender to the Romans or commit suicide.  Jewish law forbids suicide so when they opted for the second choice, they did it this way:  each man would kill his own wife and children.  Then ten men would be chosen to go around and kill the fathers/husbands.  Finally, one of the ten would kill the last nine men remaining and then that tenth man would commit suicide.  Today, Israeli combat soldiers finish their training by marching across about 60 miles of full-blown desert to Masada. They climb to the top where they have their graduation ceremony which includes shouting out the motto: Never Again!  Once this is done, they earn the right to wear the beret of the combat soldier.
The third experience happened on our last night in Israel.  IN the late afternoon the family huddled around the television watching coverage of 4 terrorist attacks in Eilat, a Southern town that is used for vacations during the month of August and also has summer camps for children.  When supper was ready we sat down to eat and shortly after the meal started, we heard the thunderous sound of a military helicopter taking off nearby.  David and  I were the only ones who were startled.  Our host must have seen the confusion on our faces because he responded laconically, "They hit us. We hit them back."  Then we heard planes flying overhead, obviously not close to us and obviously headed South.  The thing that amazed me was that the mom could tell what type of planes they were simply by the sound of the engines.  That one is a bomber....  That one is a cargo plane - you know, they carry vehicles...  Oh.. this is bad.. .that one sounds like a troop transport... After 30 minutes, the planes were still coming and she was worried.  This is big.. usually they don't fly over for this long.  I am very worried.   When they were still flying over head an hour later, she told me, I am so afraid this means we are going in on the ground.  They have been flying for such a long time, this is not typical.  Then as she stood at the kitchen sink looking down,  she said, "All we want is peace. When I was young, I believed that soon we would have it. Now I know we never will."
As it turned out, a fellow traveler, an Israeli mom, explained to me on the plane trip back to N.J. that her son was in the military and he was supposed to come home on Thursday.  But after the terrorist attacks, they canceled his leave and he was one of the ones flying South, probably over the very flat where I was having supper.  She said that the border with Gaza was so unstable that the Israeli army decided to put a lot of soldiers along the border n order to make a strong showing and prevent further attacks. So they weren't just going after the terrorists but they were beefing up the border patrol as well. Thankfully, they weren't going in for a ground war.
I have been told that the  native Israeli is called a Sabra after the cactus that grows in this little country - it (and they) are prickly on the outside but sweet on the inside. I found that to be true (about the people, not the cactus:).  The bottom line is that this is not the land of Rhett Butler and Scarlet O'Hara.  It's a land where people live, love and work never knowing when the next terrorist attack will come or when the next war will break out.  They know it's coming, they just don't know when.  (By the way, we flew out Friday morning and over the weekend more than a hundred rockets were fired into Israel and one suicide bomber blew himself up in Jerusalem, city of peace).
Under the circumstances, I understand why people walking down the sidewalks are all business and there are few smiles.  If you get home safely, then you can smile...